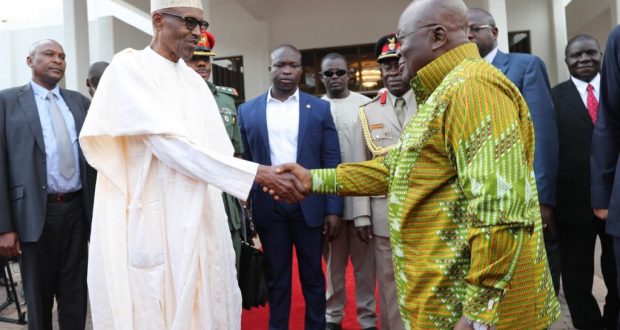 Nigerian President, Muhammadu Buhari and his Ivorian counterpart Alhassane Ouattara, and the President of Niger, Issoufou Mahamadou, have arrived in Accra for the 5th Economic Community of West African States’ (ECOWAS) Presidential Task-force meeting on the attainment of a single currency by 2020.

Also in attendance are governors of Central Banks and foreign Ministers from the ECOWAS.

The Presidential Task-force meeting on a single currency for the West African sub-region in Ghana, will be chaired by President Akufo-Addo.

Representatives of the Ministries of Finance and Economy of Cote d’Ivoire and Ghana, Niger and Nigeria, Central Banks of ECOWAS Members State and the regional institutions involved in the ECOWAS Monetary Cooperation Programme (EMCP), namely the ECOWAS Commission, UEMOA Commission, West African Monetary Agency (WAMA), West African Monetary Institution (WAMI) BCEAO and the United Nations Economic Commission for Africa (UNECA), will be in attendance for the Technical Meetings.

The meeting will provide a platform to deliberate on issues related to the ECOWAS single currency Programme and review strategies to accelerate the single currency by 2020.

The single Currency programme is in line with the vision of ECOWAS to transform the sub-region into an economic and monetary union.

“ECOWAS was founded with the aim the transforming the sub-region into an economic and monetary union. This led to the adoption of the Community Authority of the ECOWAS Monetary Cooperation Programme (EMCP) in July 1987.”

The last ECOWAS single Currency Programme was held in Niamey, Niger in October 2017.

Roads to be closed for 5th ECOWAS Presidential Task-force meeting

The Accra Regional Police Command has announced a temporary closure of some roads in Accra ahead of the meeting.

In a statement signed by the Public Relations officer for Accra Regional Police Command, the Police said there will be a temporary closure of the Osu Cemetary Traffic Light on the Castle Road to AU Circle, intermittent closure on the Independence Avenue through 37 interchanges to AU circle.

The Regional Police Command urged the general public to cooperate with the police for effective traffic management.

“The general public is urged to cooperate with the police to ensure effective traffic management.Any inconvenience that these arrangements would cause is deeply regretted.”

Minority not divided over Ayine’s suit against Amidu- Inusah