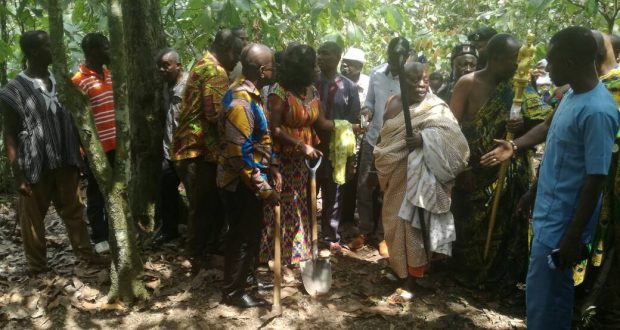 COCOBOD has expressed its displeasure with the recent rise in the level of devastation of cocoa plantations by both legal and illegal mining firms.

In 2017, hundreds of hectares of cocoa plantations were destroyed by the activities of miners across the country, with cocoa farms in the Eastern, Western and Ashanti regions being the worst affected.

Recently, the activities of rubber companies and illegal miners, at Asikesu in the Upper West Akyem District and Kwabeng district respectively have reportedly caused the destruction of thousands of acres of cocoa plantation, denying farmers and their families of their livelihoods.

Speaking to Citi News at a sod cutting ceremony for the construction of the National Cocoa Museum at Mampong in the Akuapem North Municipality of the Eastern Region, the Public Affairs Director of COCOBOD, Noah K. Amenya, condemned the activities of such companies. “I must say we are not happy with the destruction of cocoa plantations and if COCOBOD had powers on land use, we would say that no one should destroy cocoa farms for any other cultivation. But unfortunately, we do not have that power,” he said.

Mr. Amenya also pleaded with traditional authorities and other stakeholders not to sell out cocoa plantations and land earmarked for cocoa farms.

“We are appealing to opinion leaders that cocoa has helped this country over a period of time. We have seen scholarships for school children, we have seen roads being constructed from cocoa proceeds so, therefore, we should guard cocoa farms instead of allowing illegal miners and rubber companies to have access to cocoa lands. We will suffer in the long run if care is not taken. We will continue to advocate and plead with traditional rulers, chiefs and stakeholders not to sell out cocoa farms to companies whose activities will not generate the relevant benefits and revenue that cocoa generates for this country.”