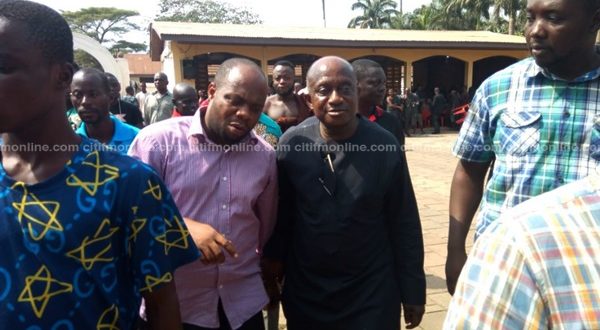 The Ashanti Regional Security Council has pledged to ensure the smooth relocation of the Atwima Kwanwoma’s District capital from Foase to Twedie, in line with a Supreme Court order.

The Regional Minister, Simon Osei Mensah, who spoke to journalists after being summoned by the Kumasi Traditional Council, however, said authorities will not be in a rush to enforce order at the expense of peace and security.

Mr. Osei Mensah said REGSEC was still monitoring the security situation in the area and has since advised the District Chief Executive, Okyere Tawiah Antwi, to stay away until there is absolute calm at Foase.

“Until we relocate it [the district capital] will still be there… relocating an office is not an event. It is a process. First of all, they need office accommodation. Even if the town should offer some buildings, maybe they have to renovated and etc.”

“We are taking steps to make sure we enforce the ruling of the Supreme Court on May 22, 2012, but I cannot tell you that we are moving today or moving tomorrow. The process will continue and we want to ensure a smooth process so we won’t rush to get into a problem like we had,” the Minister explained.

Mr. Osei Mensah also hinted that Government will absorb the medical bills of residents who sustained injuries during the disturbances.

He was not however clear if families of the bereaved families will be compensated.

“… what I can say here is that the medical bills of those who were injured and then the deceased ones, that we can pay, but for the compensation, for now, I cannot talk about it.”

The Kumasi Traditional Council has resolved to assist stakeholders in enforcing the Supreme Court order to relocate the Atwima Kwanwoma’s District capital from Foase to Twedi.

This follows recent disturbances in the area after police opened fire to disperse residents who were protesting the relocation of the District capital. The incident led to three deaths and several others sustaining injuries of which seven are still on admission at the Komfo Anokye Teaching Hospital.

The Traditional Council on Thursday summoned the Ashanti Regional Security Council and the Atwima Kwanwoma District Council to answer questions on what triggered the disturbances.

The Council also questioned the use of live ammunition by police to disperse the residents and says the deaths could have been avoided if minimum force was used.

The council has thus directed the Foase Traditional Council to sensitize residents on the relocation of the District capital.

Otumfuo Kyeamehene, Nana Nsuase Poku Agyeman III, who spoke to journalists says the Kumasi Traditional Council will hold a town hall meeting with residents of Foase for a peaceful relocation of the District capital.