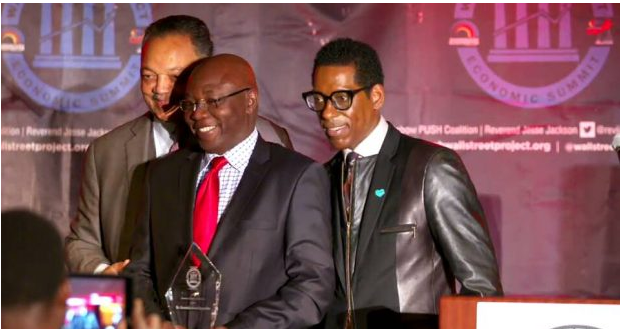 Former Member of Parliament for Amenfi East, Akwasi Opong-Fosu, has been honoured with the RainBowPUSH Coalition International Service Award for his distinguished public service in Ghana and for promoting Africa.

The former legislator served as Minister of Local Government and Rural Development in the John Dramani Mahama administration and was later reassigned as a Minister of State.

In his acceptance speech, Mr Opong-Fosu said that he saw it as an opportunity to add more value to society.

“… I consider it an opportunity to serve a higher purpose, that is, to add value to the progress of society,” he said. He also spoke about the importance of unity and having a sense of togetherness in society.

“We in Africa believe in a universal bond of sharing that connects humanity. It is based on an African humanist philosophy called UBUNTU which teaches us that, “I am what I am because of what we all are,” and “My humanness is reflected back at me through you.’ The first step in regaining our humanness is to stand on the word of God and His purpose for humanity and see ourselves as His children regardless of race…”

“… All those who believe in advancing the humanness in humanity must play their role in electing leaders who will show the way in demonstrating apathy and compassion, not indifference; build bridges, not walls; practice inclusion not exclusion…”

The Rainbow PUSH Coalition is the product of a social justice movement that grew out of the Southern Christian Leadership Conference’s Operation Breadbasket. It is a result of the merger between Operation PUSH and Rainbow Coalition and was established in 1971 by Rev Jesse L Jackson to help improve the economic conditions of black communities across the United States.