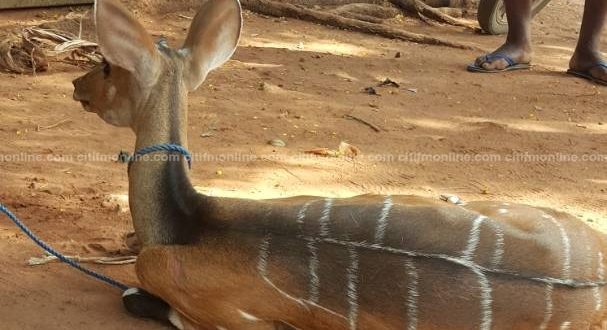 A Cape Bushbuck, a creature from the antelope family, wandered into the wrong place at the wrong time when it found itself at the Dzodze Magistrate Courtyard on Monday.

The Bushbuck ended up filling the bellies of some individuals after it was caught and eventually slaughtered by residents and workers in the area.

The Judicial Service Workers and National Disaster Management Organization (NADMO) workers in Dzodze in the Ketu North District of the Volta Region, were initially awestruck when the wild animal, sometimes called an Imbabala, was spotted at a Judge’s residence.

Eyewitnesses believed the animal may have fled from a bush-fire after it wandered onto the premises of a Basic School, adjacent the court premises, then to the Judge’s residence for refuge.

The animal, upon reaching the gate and seeing human activity, realized it was out of place. Terrified, it knocked its head against the gate and objects around as it searched desperately for a way back to the wild.

This attracted workers at the court and NADMO Officials who immediately mobilized the locals and caught the stray creature.

Citi News gathered that while the animal was tied down, hunters debated the fate of the animal; whether to let it go or end its life. While some suggested that the “beautiful” creature be kept, most of the people gathered at the scene decided it would be foolhardy to let it go, thus it was slaughtered and its meat shared for meals.

“People advised that we keep it for tourism purposes because the animal was beautiful. But others felt we kill it since it was strange to see such animals in this area” an eyewitness recounted.

Provisions are made in Ghana to protect the rights of animals, thus no animal should be subjected to cruelty.

However, that hasn’t been the case of the bushbuck which was disappointed in the hands of safety officers and interpreters of the law.

The bushbuck is a coy animal with elegant features and prefers living in dense bushes mostly at the base of mountains and along river courses.

The animal’s appearance in that area is certainly something unexpected since Dzodze is geographically a plain field in the southern part of the region.