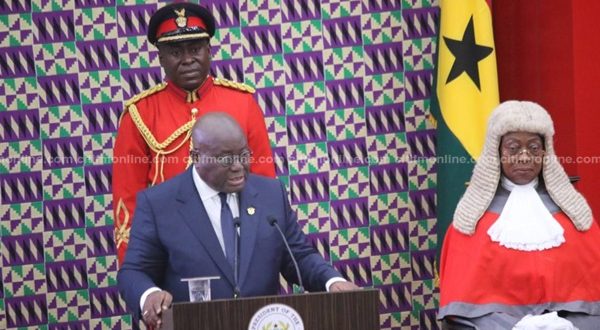 President Nana Akufo-Addo has announced that government is putting in place the necessary measures to make housing affordable to Ghanaians.

According to him, the government has started initiating policies required to drive down the cost of mortgages.

Affordable housing is a major challenge for Ghanaians as the country’s housing deficit is estimated at about 1.7 million housing units.

Delivering the State of the Nation Address in Parliament today, [Thursday], President Akufo-Addo disclosed that, deliberations are ongoing between the Pensions Regulatory Authority (NPRA), and banks, to design an effective mortgage system for Ghanaians.

This, he said, is aimed at making access to houses affordable for the majority of Ghanaians in the middle-income bracket.

“Discussions are ongoing between the Pensions Regulatory Authority and the banks to underwrite an effective mortgage system. This will facilitate access to housing for the ordinary Ghanaian,” he said, adding that government is also working to attract private investors into the housing industry.

President Akufo-Addo was optimistic that, creating an enabling environment for the private sector will encourage investors to channel their funds into the housing industry.

Highlighting some steps taken in 2017 to reduce the cost of housing, President Akufo-Addo stated that, government has shown commitment to providing homes for all Ghanaians by removing the 5 percent VAT/NHL on real estate cost.

“We have begun the difficult process of making housing affordable for Ghanaians. Government last year [2017], abolished the 5 percent VAT/NHL on real estate sales and continues to create a conducive environment that is reducing interest rates and mortgage loans,” he said.