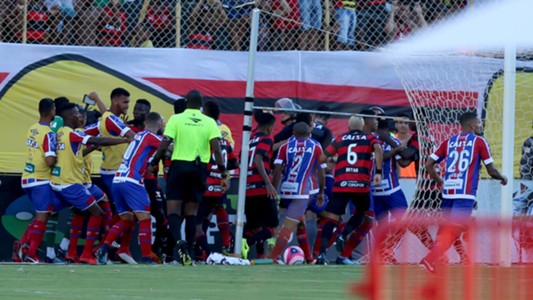 Brazilian footballers are traditionally known for their skill on the ball, but there wasn’t much on show in the Bahia state championship match between Vitoria and Bahia.

After a feisty first half featuring six bookings and Denilson’s goal for the hosts, things really got out of hand after the break.

Bahia were awarded a penalty in the 50th minute, and chaos ensued when Vinicius’ celebrated scoring it by dancing in front of the home supporters.

Both sets of players piled in, punches were thrown, and – after a delay of 16 minutes to restore order – the referee sent off eight players.

Three red cards were shown to Vitoria players, and five to Bahia players, with Vinicius and three substitutes among those dismissed.

The match continued, but when Vitoria had two further players dismissed 11 minutes from time, it was abandoned, with Bahia likely to be awarded a 3-0 victory.

Amidu must deal with leakages in gov't expenditure - IMANI Boss