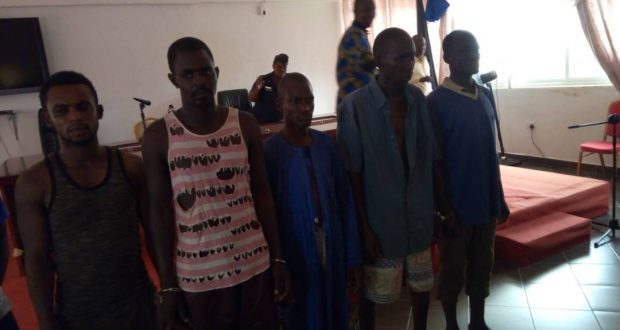 Five suspects arrested in connection with the robbery at Asante Mampong

Five persons have been arrested in connection with a robbery at a Total Fuel Station at Mampong Bosofour in the Ashanti Region.

[contextly_sidebar id=”X7QU9F9HJdlcBxFv10fE3ogR2oRClbE3″]Police at Asante Mampong had information that some suspected armed robbers numbering about six (6) had attacked and were robbing attendants at the Mampong Bosofour Total Fuel Station.

Police proceeded to crime scene, but the robbers had already left the scene leaving Davis Frimpong the Branch Manager station with injuries in the head.

The victim who was rushed to the Hospital informed police that five (5) men who were wielding machetes attacked the station at about 6:30 pm, and robbed them of cash sum of Eleven Thousand Ghana Cedis (Ghc 11,000) and five assorted mobile phones amidst gun shots.

The police patrol team after leaving the fuel station extended their patrols towards Mampong-Ejura road.

In the process, the team spotted an Opel Astra Taxi Cab with registration number GW 9311 V with two occupants on board at Kofiase junction.

The team became suspicious and approached them, but one of the occupants escaped leaving Inusah Braimah who was driver of the vehicle.

A search was immediately conducted on him in the Taxi Cab and the Eleven Thousand Ghana Cedis (Ghc 11,000) was found on him.

The police also found two pair of trousers in the bush which the suspect admitted as one of the pair of trousers to be his, and the other belonging to his other accomplice known as Kofi Bukari.

He said efforts are underway to arrest other members of the gang.

This arrest comes at a time when similar robberies have occurred in other parts of the country, raising concerns about general insecurity.

The police administration has stepped up efforts to reduce the robberies by arresting perpetrators and making sure they face the full rigours of the law.