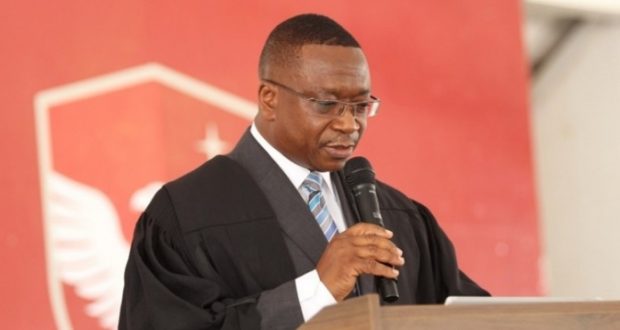 The Vice-Chancellor of the Central University, Professor Bill Buenar Puplampu, has debunked reports by some media outlets that the University faces imminent collapse due to some financial challenges.

“Recent news making the rounds in the media that the University is on the verge of collapse and about to lay off more of its staff is an untruth being peddled by some individuals for their own hidden agenda,” he said.

Prof. Puplampu said this on Wednesday during the 20th matriculation ceremony of the Central University at the Trinity Hall, Miotso.

He announced that the “University was doing well, and with the help of the Central Gospel Church International (CGCI), is about to start the construction of the University Hospital as well as its City Campus at Teshie.”

Welcoming the fresh students to the university, the Vice-Chancellor challenged them to concentrate on their studies, avoid vices and resist bad influence in order for them to excel in their academic pursuit and contribute meaningfully to the development of the nation.

He added that, “Central University is a Christian institution with very qualified academic and administrative staff with well-developed systems and structures to ensure academic and spiritual development of students.”

He warned the fresh students against the possibility of dismissal should they fail to secure a cumulative grade point average of 1.5 after the first year academic work.

He further warned that “there was a ‘no tolerance for examination malpractice’ policy in place and so you should do well to avoid being caught up in such activities.”

The Central University currently has 2,745 fresh students admitted into the university made up of 672 admitted during the February season, and 2,073 admitted in September for the 2017/2018 academic year.

Currently, the foremost private university and leader in science and law education in the private tertiary education industry in Ghana, Central University, has a student population of about 6,500, pursuing over 20 undergraduate and graduate programmes.

It has eight schools and faculties on its Miotso, Mataheko, Christ Temple and Kumasi campuses, offering programmes including Bachelor of Science and Arts degrees, Doctor of Pharmacy, whiles Online degree programmes would commence in the next academic year.