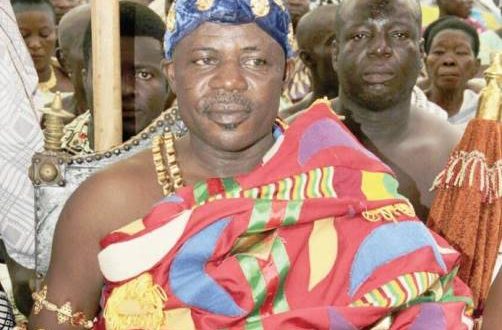 The Ejurahene, Barimah Osei Hwedie II, has assured residents of Ejura that everything is going to be done to ensure there is justice for the families of the three students who were knocked down and killed in the area.

Barimah Hwedie has also vowed to personally work with the Police and the courts until the final determination of the matter.

The Ejurahene gave the assurance a day after some angry youth in the town stormed the Ejura-Sekyedumase police station to demand the release of the driver and his vehicle to them.

This followed reports that the driver and the accident vehicle had been moved to the Mampong Divisional Police headquarters.

The youth were reportedly angered by the actions of the police amid suspicions that the matter may be swept under the carpet.

The Ejura District Police commander, Chief Superintendent Richarson Kumeko, confirmed that the police officers had to flee for their lives when the rampaging youth stormed the police station. Several items were destroyed at the Charge Office, according to Chief Superintendent Richarson.

The two female students of the Ejura Islamic Senior High Idrissu Maridiya and Shaibu Farisa, both 19 years, were killed in the afternoon of March 13, 2018 when a Nissan Navara pick up vehicle heading to Sunyani from Atebubu run over them near the Ejura Agriculture School.

The two were part of a group of four students returning home from school, and were pronounced dead at the Ejura government hospital. A third student has since passed away, while the last one is in still in a critical condition.

Speaking to the media, Barimah Osei Hwedie said he had convened a meeting on Sunday with all stakeholders to deliberate on the way forward.

“These are our children, and my elders and I will do everything possible to ensure that justice is done. I am meeting with all stakeholders to assess the situation and plan on the way forward. I want to assure my people that my elders and I will not sit by idle and watch events unfold. We will pursue the matter to its logical conclusion.”

“Ejura is a peaceful place, and we will do everything possible to maintain the peace,” Barimah Osei Hwedie concluded.

The Police says it is investigating the matter, and has told Citi News that one person believed to have led the attack on the station has been arrested.