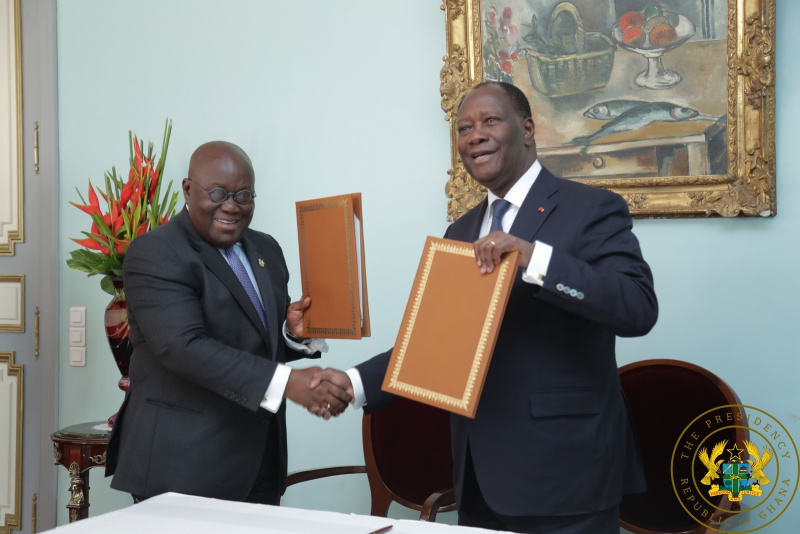 Ghana and Cote d’Ivoire have resolved to address the challenges of the cocoa sector, within the framework of the implementation of the Strategic Partnership Agreement which links the two countries, by signing the “Abidjan Declaration.”

It is for this reason that President Akufo-Addo and Alassane Ouattara, President of Cote d’Ivoire, on Monday, 26th March, 2018, held a consultation devoted to the cocoa economy, and subsequently, signed the “Abidjan Declaration.”

Reading out the communiqué, the Minister for Trade and Industry, Alan Kyerematen, who accompanied President Akufo-Addo to the bilateral discussions, stated that the Declaration is aimed at “better defending the interests of cocoa producers, as well as the economies of both countries.”

To this end, President Akufo-Addo and President Alassane Ouattara have reaffirmed their commitment to define a better, common strategy and a sustainable solution for the improvement of prices for cocoa producers, in their respective countries.

They also committed themselves to harmonizing their cocoa marketing policies, and agreed to announce every year, in a concomitant manner, and before the beginning of the campaign, the price to cocoa producers.

Additionally, Ghana and Cote d’Ivoire have also agreed to intensify collaboration, in the field of scientific research for the production of cocoa plants, the improvement of plant varieties, and also to adopt and implement a regional programme to fight against the swollen shoot disease.

A commitment by the two countries to process a major part of cocoa, and the invitation of the private sector, notably the African private sector, to invest massively in cocoa processing in Africa, was also reached.

President Akufo-Addo and President Alassane Ouattara further reaffirmed their commitment to promote jointly the consumption of cocoa on local, regional and emerging markets, and agreed that consultation between Ghana and Cote d’Ivoire, on the management of their cocoa sectors, should be done on a regular basis.