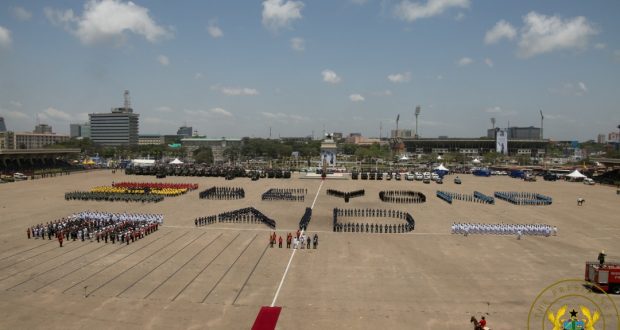 The theme for Ghana's 61st Independence celebration was "Ghana Beyond Aid"

Ghana’s 61st independence day was marked nationwide on Tuesday by persons from various walks of life in all ten regions. The spotlight was on the Black Star Square as President Nana Akufo-Addo delivered his speech along the theme of the celebration: “Ghana Beyond Aid”. The Special Guest for the event was Nigeria’s President Muhammadu Buhari, who indicated his readiness to partner with Ghana to fight corruption in the two countries. Once again, there were various display of dance and culture from different tribes, with several groups taking part in the March. There were some sour spots with the Paramount Chief of Tatali Sanguli, Obori Gariba Yankoso II, together with his sub-chiefs of Tatali in the Northern Region, boycotting celebration. The Paramount Chief accused the DCE of the area, Thomas Mbomba of disrespecting the traditional authorities hence their refusal to participate in activities.

Like most years, there were also instances of some students and other marchers fainting from heat exhaustion.