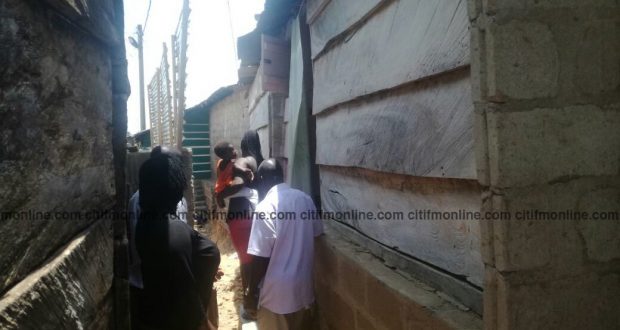 Some staff of the Eastern Regional branch of the Ghana Tourism Authority, were chased away by alleged sex workers of a brothel at Kotokoli Zongo in the Suhum Municipality after they tried to gain access to the structure.

The officers from the Authority, who had gone to the makeshift structure in a bid to ascertain whether the facility was being used as a brothel as had been alleged before closing it down, took to their heels when the irate women realized their intentions.

According to sources close to the facility, the brothel operates 24 hours daily and is reportedly a hotspot for some  Senior High School boys who skip classes and pay as little as GHC 5.00 to patronize the services of the sex workers.

The alleged prostitutes, numbering 6, hurled insults at the officials from the Authority and shrieked at them when they tried to enter the structure.

A 36-year-old woman, believed to be one of their leaders, followed the officials from the brothel to the main Suhum-Koforidua road hurling abusive words at them and shouting “it’s my private parts, not yours. I have a right to my body and I choose what I want to do with my body. What is your problem if I choose to engage in prostitution.”

“The hostility that we were greeted with at the place did not even allow us to carry out our business. They revealed and confirmed they engage in prostitution which is illegal in this country, the place is a makeshift structure which makes it difficult for us to shut down because they are not operating as a hotel but rather they rented it from a landlord”.

“I have written a formal letter to the Eastern Regional Minister Eric Kwakye Darfour who is the head of REGSEC. The Eastern Regional Police Commander has also been served with a letter, same as the Municipal Chief Executive of Suhum. Now we will heavily rely on the police in the region to take the necessary steps and take immediate action to cause their arrest for operating illegally and in prostitution.”

The Chief of Suhum, Osabarima Ayeh Kofi, when contacted by Citi News at his palace stated that the operations of the brothel have not been brought to his attention.

“I must say I am not aware of any acts of prostitution in any part of Suhum. If something of that sort exists then it has not come to my attention, but I will call on my elders to follow up on it and help the police do their job”.

Withdraw agreement to host US military in Ghana – Minority