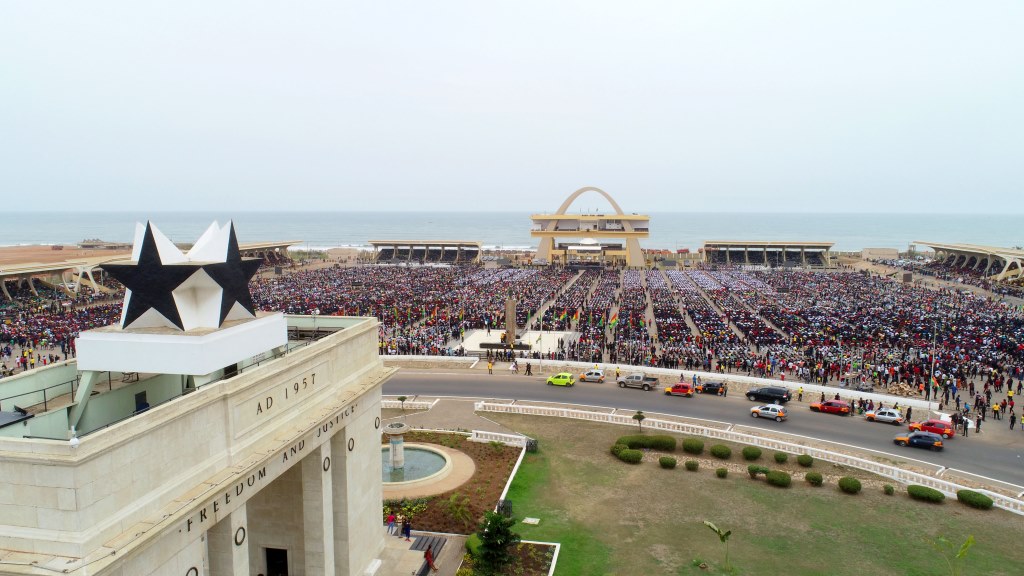 Tens of thousands of congregants gathered on Friday evening for the Good Friday Easter service of The United Denominations, originating from the Lighthouse Group of Churches led by Bishop Dag Heward-Mills.

The event, which was held at the Independence Square in Accra was characterized by mass public prayer, praise, worship and miracles. Most of the attendees who were clad in red and black clothes dedicated time for prayer for the country.

The Founder and Presiding Bishop of the church, Bishop Dag Heward-Mills, led the teeming crowd to pray for Ghana’s political and spiritual leadership.

The congregation prayed for mercy and grace for the leaders of the country and for all in authority after which prayer was offered for the salvation of 2 million people worldwide. He also declared blessings on the congregation and prayed for healing for the ailing congregants present.

The service was spiced with song ministrations from a reported 9,000-member choir who sang of the cross and salvation. About 5,000 dancers also took to the stage to minister with their skill.

Evangelist Dag Heward-Mills, who delivered a brief sermon titled “Who is Jesus Christ?”, stressed on the benefit and value of the death of Christ to Christians.

The mammoth congregation was baffled with testimonies of healings and deliverance.

A seventy-one year-old man testified with joy as he explained that his blurred vision had been healed and saw clearly. His testimony was followed by screams of joy from the congregation. He commented that, “It is a great thing to serve the Lord.”

A woman who could not walk for two years came forward with her daughter testifying that she could now walk. For six years one man who had not been able to eat said he was able to swallow a sausage roll without throwing up. His wife was there to confirm his claim.

In her account, she said prior to the service, she had a dream. In the dream, she met the wife of Bishop Dag Heward-Mills who asked her to see Evangelist Dag to pray for him. After not being able to see since Senior High School, an SHS graduate shared an emotional testimony of how her eyes were able to see after the prayer for healing.

The Evangelist also prayed that she gains admission as her condition had affected her entry into the university. The service, dubbed the ‘Good Friday Miracle Service’, is the fourth in a series since the LCI initiated the annual programme in 2015.