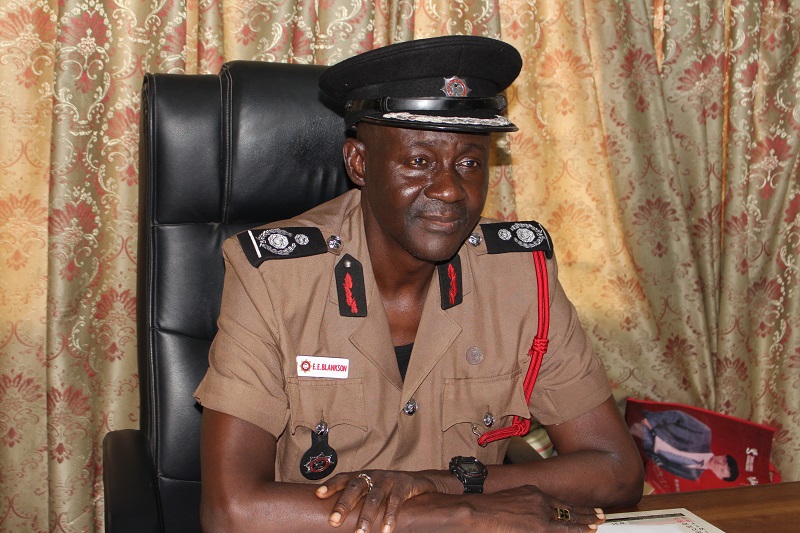 The Chief Fire Officer, Edwin Ekow Blankson, of the Ghana National Fire Service, has advised Chiefs and Community leaders who are fond of bailing persons guilty of fire incidents to stop that practice.

In Ghana, the practice where chiefs and other influential people intervene to prevent the justice system from dealing with offenders of all kinds is common.

In a speech read on his behalf, he said such acts undermine the Service’s efforts to deter people from deliberately causing fire outbreaks.

The speech was delivered by the deputy Chief Fire Officer in charge of Administration, Julius Kunor at the commissioning of a newly built Fire and Rescue Station in the Adaklu District of the Volta Region and recounted instances where people in Authority had to step in for suspects of fire outbreaks.

He appealed to the authorities to allow the laws of the country on fire safety to work.

“I would also like to humbly plead with the chiefs and other leaders to refrain from the practice of intervening and pleading for the release of culprits who have been arrested for bush fire-related offences”.

He also revealed his outfit’s commitment to ensuring safe environment for factories to be established under the government’s One District One Factory project to thrive.

The Service also assured that it was present in almost every part of the Volta Region to protect investments under the policy.

The Facility in the Adaklu District Capital, Waya, is the 24th out the 25 districts in the region with Ho West District yet to have the Station.

DCFO Daniella M. Ntow Sapong, the Volta Regional Fire Commander, said plans are far advanced towards the establishment of the Ho West Station by the end of 2018.

He therefore called on traditional authorities and MMDCEs to partner with the GNFS to achieve its goals of ensuring a safe environment for all.

The Member of Parliament for the area, Kwame Agbodza, promised a 10,000-litre water tank to help the Station commence its work.

He then called on the government to help draw water from the Volta lake in Adidome to Adaklu, to ease water challenges in the area.