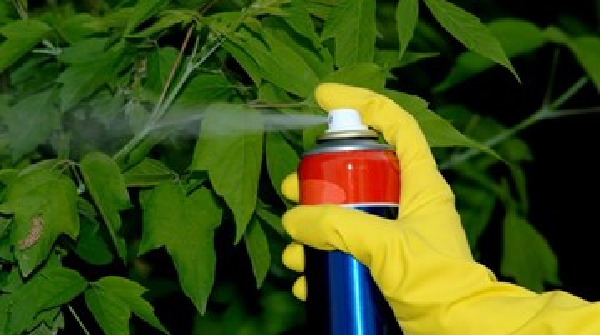 Tragedy hit a young couple in Accra when they lost their three children after they died from insecticide poisoning.

The children, nine-month-old twin girls and their two-year-old brother, died at Abavana Down, a suburb of Accra, last Friday night.

They had ingested a deadly substance called organo-phosphate found in a product called Topstoxin, a fumigation tablet for the control of insects in stored grain, processed food and feeds, and neighbours rushed them and their parents to the 37 Military Hospital for medical care.

The substance, also known as AlP, is used as a rodenticide and insecticide and a fumigant for stored cereal grains.

[contextly_sidebar id=”spNsNnx7hZJkdHnHF7LdImVnnzZ8RiU8″]Experts say it is used to kill small verminous mammals such as moles and rodents.

The incident occurred after one of the parents had sprayed their home with the poisonous substance to get rid of cockroaches.

According to hospital sources, the mother of the deceased children dissolved some of the tablets and sprayed it indoors to kill cockroaches, bed bugs and ants.

Sources told the Daily Graphic that the bereaved parents purchased the poisonous substance based on recommendations by a friend after they had unsuccessfully tried to get rid of the insects with regular sprays.

Convulsion
The Daily Graphic further learnt that the mother sprayed the rooms and stayed away for six hours before returning home.

The parents told the medical team on duty that instructions on the bottle advised users to stay clear of sprayed areas until after five hours.

On reaching home after six hours of using the chemical, the bereaved father began feeling sick and so he sought medical care and returned home only to find his wife and children convulsing and finding it difficult to breathe.

The father, who was still feeling weak, sought help from neighbours, who rushed the entire family to the 37 Military Hospital.

Hospital
The children were rushed to the Paediatric Emergency Department of the hospital, where medical staff on duty did all they could to save the children, including taking them to the Intensive Care Unit (ICU), but they did not survive.

The hospital detained the parents for observation but they were discharged last Saturday and are to report again for a review this week.

A counsellor has been assigned to the parents to assist them to deal with their traumatic experience.

The Daily Graphic gathered that the Public Health Unit of the 37 Military Hospital is investigating the source of the chemical.

The hospital authorities declined to release the names of the deceased and their parents.

“We cannot release the identities of the parents and the deceased children because we are bound to respect their private space,” a source a the hospital said.