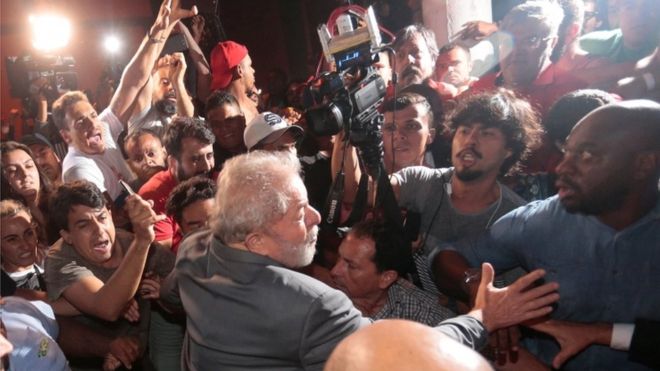 It follows a two-day stand-off that saw him take refuge in a steelworkers’ union building after missing a court deadline to hand himself in.

The 72-year-old walked out of the office in his hometown, near Sao Paulo, and was taken away by police cars.

Scores of supporters had earlier blocked his car from leaving the scene.

Lula maintains he is innocent, but said he would comply with the arrest warrant against him.

Footage on Brazil’s GloboNews showed Lula and his bodyguards pushing through the crowd outside the union building, in the town of Sao Bernardo do Campo.

He was then flown by police helicopter to the southern city of Curitiba to begin his prison sentence.

Demonstrators set off fireworks as the helicopter landed, and riot police fired tear gas to disperse the crowd. The fire department said eight people were slightly injured, one of them by a rubber bullet.

Lula was the frontrunner for October’s presidential election, but his jailing leaves the race wide open.

The former metalworker and trade union activist is an iconic figure for the left in Latin America. He was the first left-wing leader to make it to the Brazilian presidency in nearly half a century.

What did Lula have to say?

Earlier on Saturday, flanked by his impeached successor as president, Dilma Rousseff, the 72-year-old delivered an impassioned 55-minute speech.

“I will comply with the order and all of you will become Lula,” he told the crowd in Sao Bernardo do Campo. “I’m not above the law. If I didn’t believe in the law, I wouldn’t have started a political party. I would have started a revolution.”

Promising to come out of his legal troubles “bigger and stronger”, he said: “I was born with a short neck so I can keep my head high.”

When he left the stage, he was carried on the shoulders of delighted supporters chanting “Free Lula!”