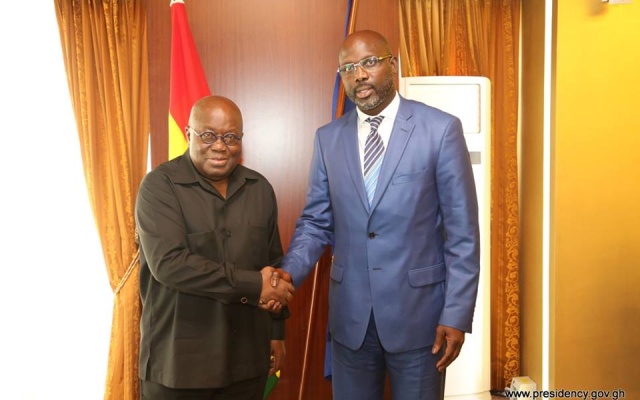 He held bilateral talks with President Akufo-Addo at the Jubilee House on Friday afternoon.

Speaking at a joint press conference addressed by the two Heads of State afterwards, President Akufo-Addo said President Weah’s visit was the latest indication of the strong ties between the two West African nations.

“He [President Weah] has come to pay a visit to us to renew the bonds of friendship and solidarity that are there between the Liberian and Ghanaian people… It’s a particularly happy day for us in Ghana and for me personally this famous man, who even before he became a president, was a household name in Africa.”

This union will be key to ensure the development of the sub-region, the President added

“The West African region must continue to deepen the contacts, the links and the friendships between us so that the challenges of the 21st century; the challenges rapid economic growth [can be overcome] within the context of democratic values and democratic institutions,” he said.

In turn, President Weah offered assurances that Liberia was willing to build on the already existing ties between the two nations.

“We came to show you that the relationship we have will be sustained and will be strengthened. You [President Akufo-Addo] are my big brother and I hope you will help Liberia to succeed,” he affirmed.

He further expressed his appreciation to Ghana for opening its doors to Liberian refugees during the country’s civil wars, that last of which ended in 2003.

“Liberia came a long and way and without Ghana, we would not be standing here today. Ghana hosted us and today, we can never repay… But I can guarantee you that in our relationship, you can count on us,” he said.