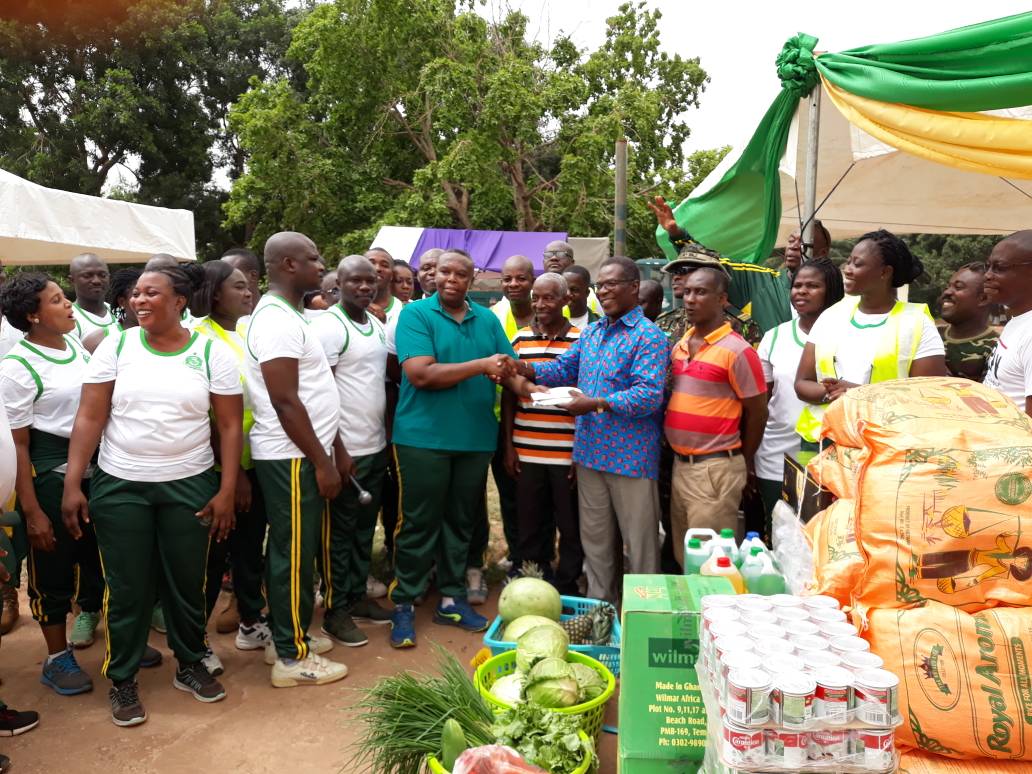 The Kotoka International Airport (KIA) Command of the Ghana Immigration Service has donated food items, toiletries, cash and other products to the Frafraha Foster home in the Greater Accra Region, as part of the command’s activities marking this year’s Easter celebrations.

The items and cash amounting to ten thousand Ghana Cedis forms part of the division’s corporate social responsibility initiatives for the year 2017.

The program, which was dubbed “ Walking for Health, Helping the Needy’ also saw officers and men of the Kotoka International Airport Command of the service embark on a health walk from the Adenta Barrier to the Frafraha Foster Home where the donation was made.

The occasion brought together some top officials of the Ghana Immigration Service including the Commander KIA, DCOI Eric Afari, Commanding officer of the immigration Training School, Supt. Kwabena Addae Koduah, Former Director of Immigration, Ambassador Hodari Okae among others.

Speaking at the ceremony, the Commander, DCOI Eric Afari said the intent to walk for health as well as donate to the needy was borne out of three important components.

“The theme was carefully selected to achieve three different objectives, thus: To create health awareness among officers, to build and rekindle the spirit of team work and to share our widow’s mite with needy in society thereby discharging our corporate social responsibility” he said.

He also charged officers to employ healthy lifestyles in order to improve their health and productivity.

Touching on the donation, Mr. Afari said “Easter season is the period for sacrifice as exemplified by our lord Jesus Christ. Our desire is to share our widow’s mite with the less privilege in society, hence the package in cash and kind we present to the Frafraha Foster Home”

DCOI Eric Afari also indicated the command’s readiness to manage the terminal three of the airport which is near completion.

“The KIA command is bracing up for the expanded operation at the new terminal. The Immigration ICT set up at the new terminal is almost complete with the installation of work stations at both arrival and departure halls. The officers are currently undergoing intensive intelligence led training, customer care and ICT proficiency courses. This is to adequately prepare the command to meet the high standard of performance expected at the terminal three” he added

The Frafraha Foster Home located in the Greater Accra Region was established in 1972 at Kpehe before moving to its present location.

The home has a total population of forty six children. It also operates a school which is up to the Junior High School level. Six and four of the students are due to complete JHS and SHS respectively, while fourteen others are currently in various vocational and Senior High Schools.