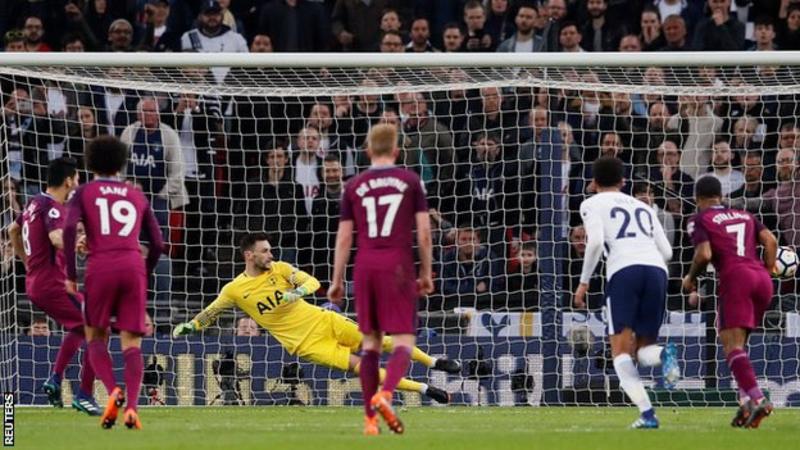 Manchester City are on the brink of winning the Premier League as they bounced back from their Champions League exit with victory against Tottenham at Wembley.

Pep Guardiola’s side need just three points to be crowned champions, but they will win the title if second-placed Manchester United lose to West Brom on Sunday or to Bournemouth on Wednesday.

Otherwise a City victory in their next game against Swansea on 22 April will be enough.It was a morale-boosting win for City after the disappointment of Tuesday’s defeat to Liverpool in the Champions League quarter-finals.

Despite completely dominating the first half, there were some nervy moments as Tottenham got back into the match, until Raheem Sterling scored City’s decisive third.

Gabriel Jesus had put City ahead in the 22nd minute, racing onto Vincent Kompany’s long ball and sliding a low shot past Hugo Lloris.

Just three minutes later, the France goalkeeper conceded a penalty, with a studs up sliding challenge on Sterling, although replays suggested it occurred outside of the box. Ilkay Gundogan converted from the spot to double City’s lead.

Against the run of play Christian Eriksen halved the deficit. Latching onto Harry Kane’s through ball, his shot ricochet off Aymeric Laporte and then back off the Dane and in past Ederson.

After the break City withstood a period of sustained pressure from Spurs, before Sterling hammered in the rebound from Jesus’ shot to secure all three points in the 72nd minute.

It inflicted Spurs’ first league defeat since losing 4-1 at City on 16 December, ending an unbeaten run of 14 matches.

Much like the first-half of last weekend’s Manchester derby, City were totally dominant.

David Silva and Kevin De Bruyne, two nominees for the Professional Footballers’ Association Players’ Player of the Year award, were afforded the freedom of Wembley.

But Eriksen’s goal sent shockwaves through the City team, with Guardiola throwing his water bottle down in frustration at his team’s defensive misgivings.

Suddenly Spurs were on the front foot and it looked like City might blow a two-goal lead for the second time in a week, after Manchester United’s 3-2 comeback win in the derby.

City were also wasteful in front of goal, first Jesus scuffed a shot wide from 12 yards with just Lloris to beat.

Then Sterling, who was guilty of missing two golden chances against United, skipped past the Frenchman, but with the goal at his mercy, hesitated and Ben Davies managed to block his shot.

In the end, the Spurs comeback never materialised and City saw out their first win in four games.

Spurs’ slow start
Tottenham started the game poorly and by the time they got into the contest, they found themselves 2-0 down.

They afforded so much space to City’s attacking talents and were repeatedly caught out of position in defence.

The first-half could have been worse, Leroy Sane should have put City ahead after three minutes when he found himself in space in the box and hit the post with a volley, while Davinson Sanchez struggled at the heart of the Spurs defence.

They looked a different team after the break, hustling and pressing City, pinning the visitors, preventing them from playing out from the back.

While Eriksen was Spurs’ best attacker, Kane was subdued, offering little threat with just 18 touches in the match.

De Bruyne showed why he is one of the front runners for the PFA Player of the Year. One of the highlights of the game was a pass to Sterling in the second-half, that the Belgium volleyed off the outside of his boot
‘After 15 minutes I said we will be champions’

Tottenham boss Mauricio Pochettino told BBC Sport: “In the end, if we analyse the game, they fully deserve the victory.

“We struggled to start in the game. When we conceded the penalty, we started to play.

“For sure they are going to win the league, but I’m disappointed because we didn’t compete in the first 25 minutes.

“In football you always want to compete and win. We feel that we are close but it is not enough.

“We still need to improve to reach the last level which is the most difficult thing.”

“In the past with [defeats by] Manchester United and Liverpool, maybe it was not easy for the players but we were good and we created chances in the second half to score more goals and we’re so happy.

“We will try hard to be champions in front of our fans at the Etihad Stadium.” 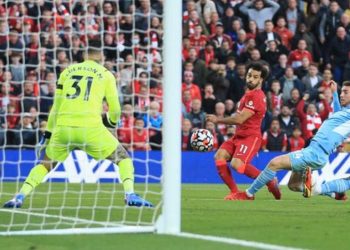