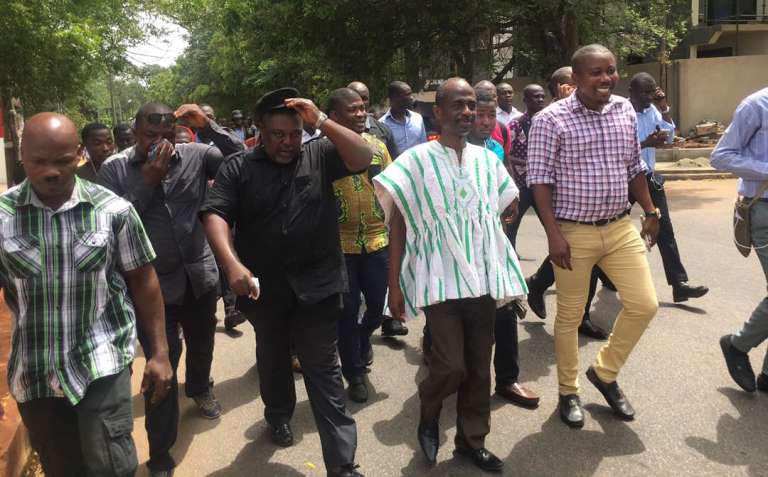 The Deputy General Secretary of the opposition National Democratic Congress (NDC), Koku Anyidoho says his respect for the country’s security agencies have shot up after spending two nights in their custody.

According to him, during his confinement at the Bureau of National Investigations (BNI), he was not manhandled or tortured despite allegedly threatening coup but was instead treated professionally.

“The state said I had to be detained and I was detained. Yes, it is not the best to be in solitary confinement but then I now had the opportunity to understand the workings of our state institutions and it allowed me as a politician to begin to accept and respect the police, [and] BNI bigger than ever before.  Not that I ever disrespected them but now they have my greater respect. What we have to do as politicians are to support them to operate properly and more efficiently,” he added.

Anyidoho was detained by the Criminal Investigations Department (CID) for allegedly threatening coup and civil revolt on public radio.

He had allegedly indicated that President Akufo-Addo will be overthrown because of the ratification of the controversial defence cooperation agreement between Ghana and the US saying it could spark a “social revolution” in Ghana.

“There will be a civilian coup d’état. There will be a social revolution. We [NDC] are starting it on Wednesday. The movement is starting on Wednesday. Nana Addo will have sleepless nights. He will suffer diarrhoea. He said he wanted to be president, but we will make sure he will be fed up on the seat,’’ he added.

He was subsequently detained by the CID where he spent two nights in the custody of the BNI after which he was granted bail last Friday.

Recounting his experience on Citi FM’s news analysis programme, The Big Issue, on Saturday, Koku Anyidoho said he was also given proper health care while in custody at the BNI.

He, however, called on Ghanaians to give the security agencies their full support to enable them to discharge their duties as expected of them.

“I respect the way they operated, I was not handcuffed, I was not maltreated. Never did the CID or BNI maltreat me. It’s an experience. When you are in solitary confinement it is an experience. I am not the first and I will not be the last. Nelson Mandela spent 27 years, Osagyefo went through, [former] President Rawlings went through it. Many people have gone through it so I have no pain, I have no hurt. I don’t hate anybody and I refuse to hate anybody in this matter.”

“I will forever respect the police, CID, BNI to the extent that even medical care in the BNI, they will grant you the best of medicare. In my case I was not tortured, they gave me a doctor, they allowed me to have medicare,” he recounted on the Big Issue.

I’ve not been charged

Koku Anyidoho, also discounted claims that the CID has officially charged him with treason.

According to him, the CID is still investigating his alleged crime and has not proffered any charges against him.