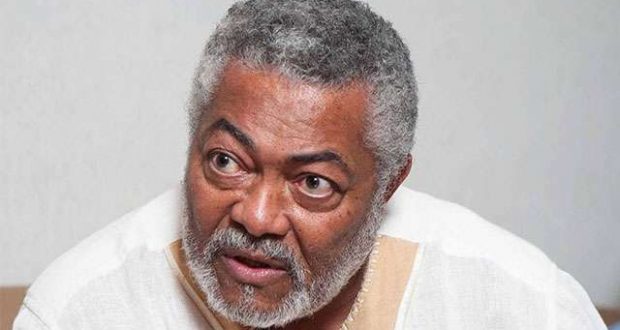 Former President John Rawlings is convinced that the Ghana-US defence cooperation will not compromise the sovereignty of Ghana following the “timely” and “hard” address from President Nana Akufo-Addo.

In a tweet, he said his major concern with the deal were the initial reports that the US was going to establish a military base as a new addition to the longstanding agreements.

Mr. Rawlings had earlier cautioned against the agreement saying Ghanaians were not ready to live with foreign troops.

But following President Akufo-Addo’s special national address on the matter, Mr. Rawlings’ fears have been allayed.

Like the President’s assertions, Mr. Rawlings said such military cooperations “be it military or diplomatic has always been there.”

He however said, “if there are details of the agreement that warrant a second look, such details should be examined to create comfort for all sides.” 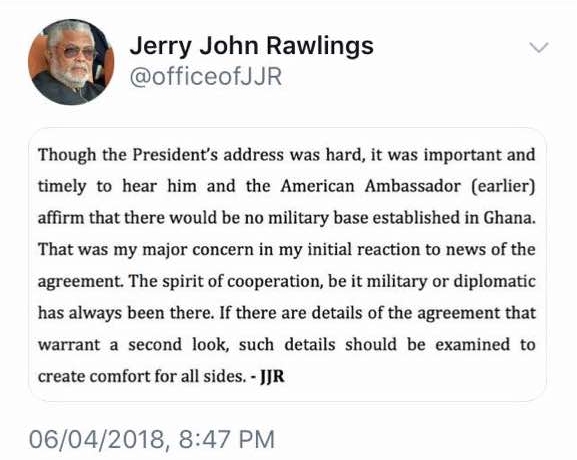 Ignore the hypocrites
A lot of the opposition to the agreement has come from Mr. Rawlings’ party, the National Democratic Congress and its members.

But President Akufo-Addo urged Ghanaians to ignore them, describing them as hypocrites and naysayers during his speech on Thursday evening.

He said he was outraged at some of the rhetoric emerging in opposition to the deal which he suggested was unpatriotic.

A lot of the critics from the NDC said the Akufo-Addo government was mortgaging of Ghana’s sovereignty by accepting the agreement.

But the President insisted that Ghana’s sovereignty has not been traded as has been suggested by the NDC, among other critics.

He added that it was highly hypocritical of people who are fully aware of the details of the agreement and the benefits to have chosen to confuse Ghanaians with falsehood in the name of political expediency.

Key points from the address

Conditions of the deal also mirror the conditions under which Ghana participates in UN peace-keeping operations, he added.