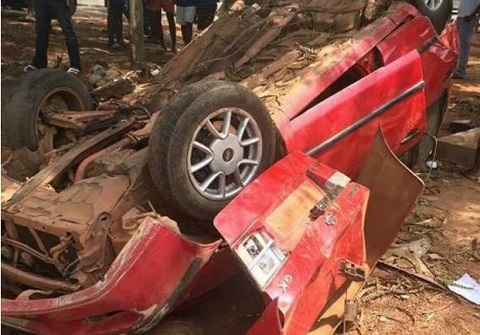 A Diesel Tipper truck with registration number WR 1166-15 crashed two people to death on the outskirts of Ahwetieso in the Tarkwa Nsueam Municipality.

The deceased persons were travelling in a Nissan Primera with registration number WR 1591-W when the incident happened.

They have been identified as Alhaji Shaibu Suleman, a 56-year-old contractor and scrap dealer and Tingani Mohammed, a 40-year-old excavator operator.

Both bodies have been deposited at the Apinto Government Hospital morgue for autopsy.

The Divisional Motor Traffic and Transport Department (MTTD) Commander for Tarkwa Nsueam, Superintendent of Police Mrs Victoria Yamoah, disclosed this in an interview with the Ghana News Agency.

Superintendent Yamoah said on April 20, at about 16.30hours, the Tipper Truck driver, Enock Nuala, 37, lodged a complaint at the Tarkwa Police Station that his vehicle had been involved in an accident.

The MTTD Commander said based on the information she led officers in her outfit to the accident scene and gathered that the suspect driver was travelling from Tarkwa towards Ahwetieso.

She said on reaching some few meters from Welham Company’s building at the outskirts of Ahwetieso, his vehicle veered into the opposite lane and crashed with the oncoming Nissan Primera.

She explained that the two occupants were trapped in the severely damaged vehicle where they eventually died.

“It took us some time but with the assistance of personnel from the Ghana National Fire Service and other teams we were able to get them out of the car,” she added.

Superintendent Yamoah emphasized that both vehicles have been towed from the accident scene to ensure the safety of road users.

The suspect driver is currently in police custody for interrogation.