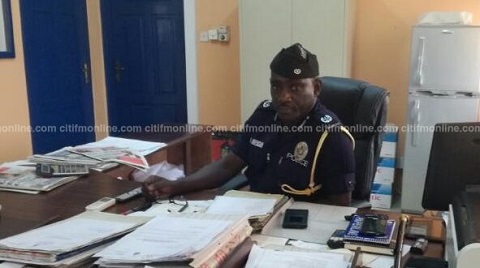 The Accra Regional Police command says it has marked some successes in dealing with armed robbery in the capital.

According to the police, the situation is currently under control, despite recently reported cases at Madina, Oyibi, Ashongman and Trassaco, all in Accra.

[contextly_sidebar id=”vPHMq3uJRGoPRj2Bu1WYBtzfviNOVz8G”]Speaking to Citi News, the regional police commander, ACP George Alex Mensah said they are on top of issues.

“We are now in control, I guess you have heard about the successes we have chalked in the fight against arm robbery, but now the situation is calm, and the police are in control,” he said.

He said the police are proactive and has never been overwhelmed with lack resources.

There has seen some robbery incidents in the Accra, one on a Forex Bureaux at Spintex and two daylight robberies in the North Kaneshie area.

Two persons were reported to have sustained gunshot wounds from suspected robbers who appeared to be fleeing a crime scene.

Gunfire was first heard in the area around a Latex Foam showroom at North Kaneshie where the robbers had crashed their vehicle. Two persons have since been arrested in connection with the incident.

Armed men stormed Royal Motors, an automobile company in Accra, making away with the company’s sales.

Eyewitnesses reported that the robbers trailed a bullion van that had entered the Industrial Area premises of the company to collect the company’s sales.

Despite these attacks some of which have been recorded in Accra and Tema, the then Director of Operations for the Ghana Police Service, COP George Akufo Dampare said although his outfit was logistically deficient, they were ready to put their lives on the line to ensure the safety of every Ghanaian.

Speaking on the Citi Breakfast Show, Dampare also noted that the support of the citizens would go a long way to help the Police Service combat the increasing rate of crime in the country.

“We want to assure them [citizens] that we will go every length, including losing our lives to make them safe. We understand that we are not there yet, regarding the full complement of our equipment. We also understand that over the years, government after government has attempted to bring us to a particular level regarding equipment,” he said.

On the subject of land guards who often terrorize residents and landowners, ACP Alex Mensah said his outfit has dealt with the menace drastically.

He reiterated that although the activity has reduced, there are still some miscreants out there, but the situation is better than before.

“It has gone down drastically, that does not mean that it is completely eradicated, that is not possible, there are still pockets of it, and we are still dealing with it But at least we can confirm it has drastically reduced and now people who do that, do so looking over their shoulders,” he said.

Developers at Gbestsile Obeyeyie have been facing land guard attacks each time they visit their site, and this has been a worry to them.

They expressed their frustration with the Gbetsile police for failing on several occasions to effect any arrest each time a report is made.

“This is not the first time we are being attacked by these land guards, but we are yet to see any serious action taken against them by the Gbetsile police. The only result we often get is from the Afienya Police Command who are swift to respond to our call each time we are attacked,” they noted.

They appealed to the police to act dispassionately and bring the perpetrators of these constant attacks to book as they are known faces in town.