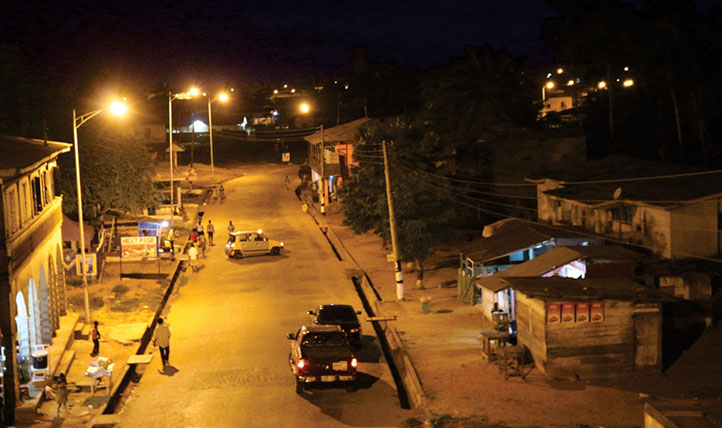 Though Ghanaians pay some 3% for streetlights installation and maintenance as part of their electricity billings, the reality of having functioning streetlights in their communities has eluded most of them, a canker that undoubtedly contributes to the various crimes at night.

The Central Regional capital, Cape Coast, and Mankessim have not been exceptions to the unavailability of streetlights on most of their major streets, coupled with the resultant criminal activities there.

The situation in Cape Coast

A Citi News night monitoring of the stretch of the Cape Coast-Takoradi highway from Aggrey Memorial Senior High School area to 3rd Ridge Junction up to Adisadel School gate shows a gloomy picture.

The stretch, a distance of about ten km, has many poles meant to hold lamps to give light on the highway, but they are only hidden in the bushes with none functioning, a situation that has persisted for many months.

The darkness on the stretch poses a great danger to both humans and cars.

The situation is similar between the Pedu Junction Goil Filling Station area and the first gate of the University of Cape Coast (UCC), a dark curve where robbers terrorise pedestrians and other users of the shoulders of the highway.

Another stretch characterized by darkness with its accompanying attacks from criminals is the Ola side of the highway, between the UCC first and last gates.

A UCC student, Peter, who shared his fear lamented, “Even on campus, there some places with no streetlights and robberies go on there; when they attack you, and they don’t get any item on you, they just mark you with a knife or a blade as a reminder that next time you have to carry something on you”.

Some residents of Cape Coast told Citi News the streetlights in the town are only fixed during the Fetu Afahye period.

At half past 8 p.m. when Citi News monitored the street from the Siwdu Park through Adisadel Post Office to Pedu Junction, like a busy street for people at night as it is, only a few isolated streetlights were spotted, with most of the stretch very dark and a threat to the security of mini-shop owners and pedestrians.

A shop-keeper on that street said they only keep doing business on the dark stretch to survive as they continue to pay the price in the hands of robbers who constantly attack people there.

“It (the lack of streetlights) makes robbers come around, and they break into shops around here and take items from the shops”, she narrated.

Mankessim, the populous town in the Mfantseman Municipal Assembly, is noted for its large market and booming businesses.

It has witnessed some police swoops recently because the town is gradually becoming a centre for criminals who usually carry out their evil activities in darkness.

Here, apart from the stretch from the roundabout to the bridge in the Accra direction, almost all the streets are dark at night; only security lights of private houses and the headlights of taxis provide some amount of light on some of the streets.

A Junior High School boy, Ankomah, tells Citi News how a robbery at his mother’s shop, as a result of the darkness, has rendered the mother jobless and has affected his education.

“Two months ago, they came to steal all the things in my mother’s shop. Because there is no light on the street, you won’t see the armed robbers. Now I have to struggle to go to school”, he lamented.

Commenting on the situation, the Central Regional Commander of the Ghana Police Service, DCOP Paul Manly Awini, stated criminals love to perform their activities under cover of darkness and that the police have also strategised well in policing the two towns, Cape Coast and Mankessim.

He told Citi News: “I can assure you that our activities at those areas that are dark in the night are much more intense than other areas; we have got a well mapped out strategy that those areas are properly policed so that the criminals will not have their way”.