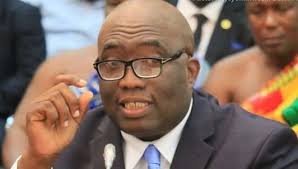 The Ministry for Railway Development has opened responses to the Request for Qualification issued to various companies shortlisted for the construction of the Eastern Railway Line.

[contextly_sidebar id=”4jFrJZtrw4xeZ9SxiCxgdvfRP7YpLvvi”]Their documents will be evaluated and those shortlisted will be invited to take part in the last stage of the procurement process.

Joe Ghartey, the sector Minister today speaking to the Media said his outfit is working hard to ensure the construction of a new Eastern Railway Line commences this year.

Speaking to the media in Accra, the sector Minister, Joe Ghartey said his outfit is working hard to ensure the construction of a new Eastern Railway Line commences this year.

“This is the second stage; the second stage is the request for qualification. Within a few days I will get a report from the evaluation team, how long it will take them, depending on how much information. If the quality of information is good, it will not take along. From that stage, the next stage will require them to bring forward a detailed proposal. I desire that by the third quarter of this year, will reach financial closure and sign the contract,” he said.

In June 2017, the government announced that it would need 7 billion dollars to revamp the sector but different groups including the minority in Parliament said the government was being over-ambitious

“You are dealing with investors who want to invest. It could be Public-Private Partnership, Government of Ghana or Build Operate and Transfer. Rail investments are huge, so you have to be very innovative in funding such projects. We have received over 202 Letters of Interests. They want to engage the ministry in discussing funding arrangements for the various projects,” he said.

About the Eastern Rail Line

The Eastern Railway Line links Accra to Kumasi with a branch line from Achimota to the Tema Port. The total track length is 330 km, and the gauge is 1,067 mm.

The existing Eastern Railway Line was built in 1923.

The Eastern Railway Line currently is virtually non-operational, and the rail tracks are in a deplorable state.

The tracks are worn out, the wooden sleepers are rotten, and the track ballast cushions are thin.

Beyond Nsawam, the tracks have mostly been removed or stolen.

Let me release my video before your premiere – Pono begs Anas

Let me release my video before your premiere - Pono begs Anas