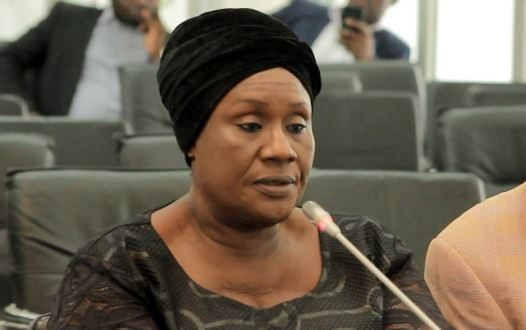 The Chief Executive Officer of the Ghana Cylinder Manufacturing Company, Frances Essiam, has challenged her suspension by the company’s board, declaring that she is still at post performing regular duties.

Her declaration is in defiance of a directive from the board of the company who voted for her suspension on Wednesday evening following an impasse at the company’s premises.

[contextly_sidebar id=”vsodDfdsP20fF1AY7UykRbZ0l4t5Aa8k”]“I’m appealing to the Union to appeal to the workers to go back to work….The appropriate authorities are handling matters, so at this stage, I’ll appeal for calm. I am the substantive CEO and I have come to work,” she said.

The staff of the company earlier on Wednesday morning staged a protest over the decision of the board.

Clad in red and black, they sang protest songs and chanted slogans in disagreement with the suspension.

The staff however called off the protest at the behest of the Madam Essiam, who was accorded a rousing welcome when she arrived at the company.

Madam Essiam, who said she was appreciative of the support of the staff, urged them to resume work in the interest of the country.

She said the State Enterprise Commission and other stakeholders are working to address the impasse ensuing impasse between her office and the board.

“State Enterprise Commission under Asamoah Boateng, the executive chairman and Boakye Agyarko, the Energy Minister and other stakeholders who supervise us are working hard to resolve the issues and in the shortest possible time, the media and all Ghanaians will know what will happen,” she said.

Madam Essiam’s suspension came on the back of a disagreement with the Board Members during which she locked them out on Tuesday afternoon when they attempted to hold a meeting at the premises.

The Board had reportedly queried Madam Essiam over claims that she has mismanaged GCMC, and also awarded some contracts without the approval of the Board or the Energy Ministry.

Six out of the nine Board Members took the decision to suspend her on Tuesday evening.

The workers who have declared their loyalty to the CEO, have questioned the board’s decision, deeming it unfair and inappropriate.