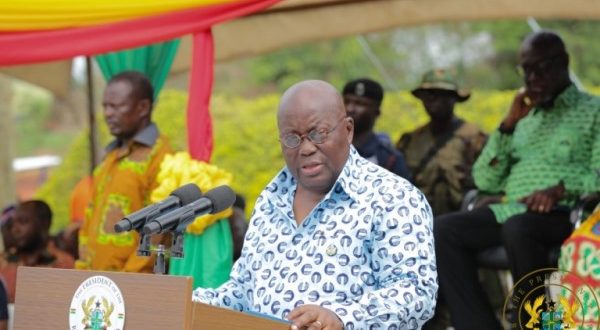 Second year students at the senior high school will not be expected to pay for their education from September this year.

This is because President Akufo-Addo has said that his government will extend its flagship Free Senior High School policy to second year students beginning next academic year.

[contextly_sidebar id=”Wnu3RDOJZYQBXAV2va1M1zKjZor9eZxp”]The president made this revelation at a durbar in Busunya in the Nkoranza North District of the Brong-Ahafo Region as part of activities marking his 3-day tour of the area, saying “Free SHS has come to pass. In September, second year students will be rolled onto the programme.”

The free SHS programme which was rolled out in September 2017 has been fraught with some challenges.

The government has however given the assurance that the programme will be sustained despite the challenges.

The Ankobeahene and acting President of the Nkoranza Traditional Council, Oheneba Adjei Baffo at the gathering also commended the President for implementing the free SHS policy and other programmes geared towards improving the quality of lives of the Ghanaian people over the last 16 months, the period of stay of his government in office.

“Your Excellency, I seize this opportunity to commend you and your government for the various interventional programmes, like Free SHS, Planting for Food and Jobs, and the Nations Builders Corps (NABCO)”, Oheneba Adjei Baffo.

Additionally, the acting President of the Nkoranza Traditional Council thanked President Akufo-Addo for “honouring his campaign promise of creating new regions. It is on this score that two new Regions will be carved out of Brong Ahafo Region.”

The Chief said, “Nkoranzaman, as well as all other paramountcies falling within the proposed Brong East Region, are much grateful to you for such consideration, in fulfilment of your campaign promise of creating new regions.”
Oheneba Adjei Baffo stated that the Nkoranza Paramountcy “has vast lands, minerals, rivers, gold deposits, human resources to boost effective administration of the new region.”

The Nkoranza Chief made this known at Busunya, in the Nkoranza North Constituency, when President Akufo-Addo met with “the Coalition of Zone ‘A’ Chiefs”, on day one of the President’s ttoursof the Brong Ahafo Region.

Also present at the durbar was the Omanhene of the Techiman Traditional Council, Nana Oseadeayo Akumfi Ameyaw IV, who spoke on behalf of the Bono East Coalition, thanked President Akufo-Addo for fulfilling his campaign pledge of creating new regions.

He stated that the proposed creation of the Bono East Region would be viable because of the presence of an abundance of human and natural resources needed to sustain the region.

“If you (President Akufo-Addo) help us create this region, it will be truly historic. Help us, so that it becomes your legacy. Indeed, it was during Kwame Nkrumah’s time that the Brong Ahafo Region was created. Let it also be said that it was during President Akufo-Addo and the NPP’s time that the Bono East Region was created,” Nana Oseadeayo Akumfi Ameyaw IV said.