Health students to stage another demo over NABCO 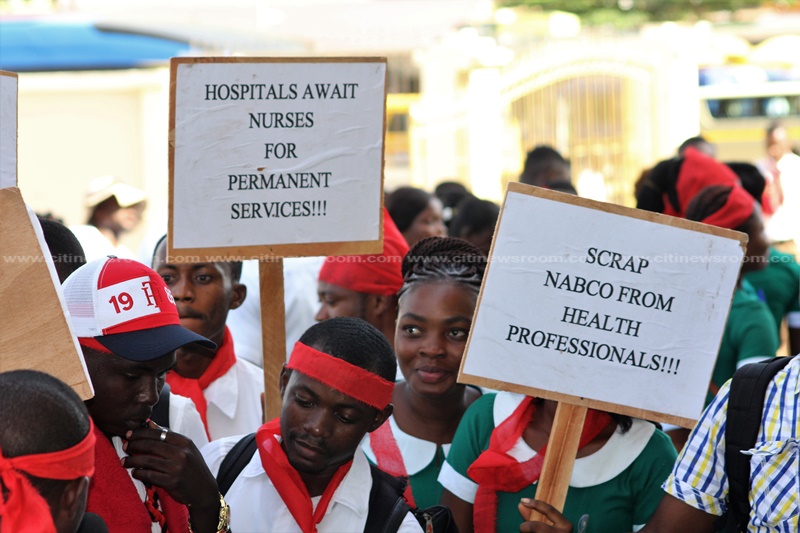 Some unemployed nurses and health professionals in the country have threatened to stage another demonstration after the government’s failure to review the terms of the Nation Builders’ Corps (NABCO).

The nurses, who met the Vice President, Dr Bawumia after their first demonstration to discuss their grievances said the veep failed to listen to them.

[contextly_sidebar id=”uZTble4NFbagfhPA2UIliNmMzkGjsD8I”]The President of the National Health Students Association, Richard Osei Yeboah said although they are not against the government’s decision to introduce the program to address graduate unemployment, they believe that the remuneration falls far below their skills and training.

They also said the government’s decision to enrol them in the program was a subtle way of shirking its responsibility towards them.

Since the nurses are trained with taxpayers money and given allowances during their training, they’re bonded to work for the state for a period after completion of their training.

The NPP government had promised the unemployed nurses jobs by of granting the Ministry of Health financial clearance for them to be permanently employed.

“We were very disappointed in the outcome [of the meeting] because all the issues we were looking forward to get the Vice President address were not addressed. The meeting was more of him telling us all what we have heard before. The same story. On Monday or Tuesday we’re convening a meeting with our mother unions to discuss the outcome of the meeting and from there we have other plans we will be put out regarding the whole NABCO and our financial clearance issues. Very soon [we’ll go hit the streets again].

The health professionals are being encouraged to enrol in the government’s Nation Builders’ Corps (NABCO) which is for a maximum period of 3 years for GHc 700 each month.

But the nurses said enrolling in NABCO may mean that clearance for permanent employment will not be granted.