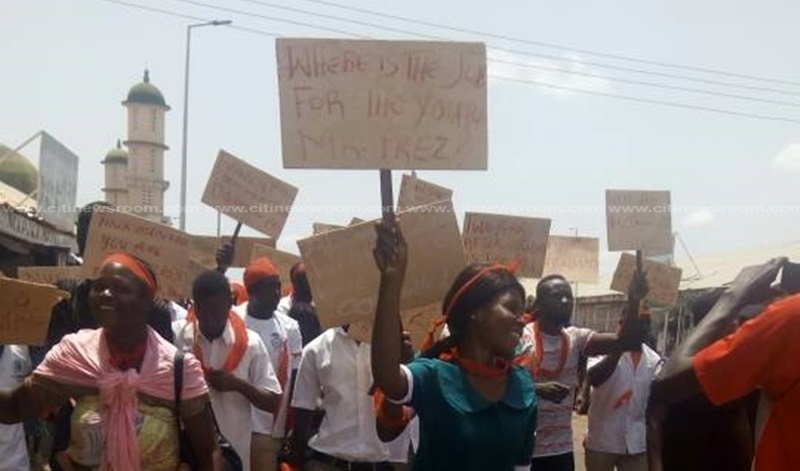 Members of the Ghana Nurse and Midwife Trainees Association, have told Citi News that they will be embarking on a mass demonstration to protest their enrollment under the Nation Builders’ Corps (NABCO) initiative launched by the President on Tuesday.

Even though President Akufo-Addo is optimistic the programme will mostly solve the country’s unemployment situation, the unemployed nurses and midwives argue that it does not provide job security and that the salary structure is unfair.

“We cannot allow ourselves to be treated in such unfair manner. Somebody has gone to school for two to four years to be recruited as a youth employment nurse, it is very pathetic…we are not ready to embrace this programme into our profession. It is actually an insult. Coming Monday we are going to embark on a demonstration to present a petition to the Vice President of the Republic to reconsider their decision to recruit nurses or health professionals under the NABCO programme as they intend to do.”

The government has however explained that unemployed nurses who sign unto the Nation Builders Corps (NABCO) will still be posted given when they eventually receive financial clearance from the Finance Ministry.

But responding to the Nurses and Midwives Association, a Technical Adviser at the Office of the Vice President, Anyas Ibrahim, said the rolling out of NABCO does not truncate the government’s contract with bonded nurses.

[contextly_sidebar id=”R8nInBdqG8nl10WVQ1SI6Obfv9uSv645″]“This is highly voluntary, it is not conscription… In their particular case, this may be an entry and an exit case because in a matter of two or three months when their clearances are resolved, then you are not obliged to be on this scheme. This scheme is not coming to replace anything that currently prevails,” he added.

He said the NABCO scheme would probably be a stepping stone for the health workers as well since it will help them polish their skills and talents.

“If someone is actively seeking to utilize their skills or talents especially if they have hands-on skills such as what we have in the healthcare sector, we believe that it is good for them to see this scheme as a way of engaging those skills for their own professional experience and integrity. The system has just come to complement what possibly exists already in the system,” Anyas Ibrahim added.

Exempt us from NABCO

A group calling itself coalition of unemployed nurses had earlier described the scheme as “unrealistic.”

The nurses claimed that the scheme is an attempt to hoodwink Ghanaians, and thus called on the government to exempt them from it.

They said “We the unemployed nurses have unanimously kicked against this half cooked policy by this government which seeks to engage us for a period of three years on contract basis. We have gone through series of rigorous training, ethically, physically, psychologically and licensed to practice as qualified Nurses.”

President Akufo-Addo launched the Nation Builder’s Corps on Tuesday as an alternative job creation opportunity for the country’s jobless graduates.

It also forms part of government’s commitment towards addressing the high unemployment in the country.

The programme, which will be managed by the office of the President, will focus on alleviating shortfalls in public service delivery. Beneficiaries are to receive GHc700 as monthly stipends.

Check out breakdown of government’s over 1 million jobs

Check out breakdown of government's over 1 million jobs