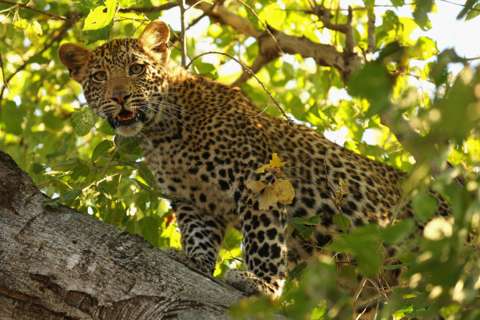 Ugandan authorities are hunting for a leopard in Queen Elizabeth National park  after it snatched and ate a ranger’s three-year-old son.

The toddler had been left in the care of a nanny at the unfenced staff quarters of a safari lodge in the park, when he was taken by the leopard on Friday night.

“The maid was not aware the child followed her. She heard the kid scream for help, she intervened but it was too late the leopard had vanished with it in the bush and a search was mounted until we got the skull the next day,” he said.

“The hunt is on with the intention of capturing the leopard and removing it from the wild because once it has eaten human flesh, the temptations are high to eat another human being, it becomes dangerous,” he added.

The attack comes just a week after a British safari park owner was attacked by a lion in South Africa.

Mike Hodge, 71, suffered a broken jaw after he was mauled in Marakele Animal Sanctuary in Thabazimbi.

Mr Hodge had been showing visitors around the park when the big cat charged him and dragged him into some bushes.

Video footage of the incident showed terrified tourists screaming for help as the lion mauled its victim.

Two years ago, in South Africa, a year a six-year-old boy was snatched by a leopard at Kruger National park, but the youngster escaped with his life.

Kellan Denny was playing with his brother on a wall when the leopard sunk its teeth into his shoulder and dragged him away.

However, the leopard let go of the traumatised boy, allowing his father to rush in and carry him to safety.

The incident was the first of its kind in 40 years, according to a spokesman for Kruger National Park.

7 dead, four in critical condition in accident at Zebilla

7 dead, four in critical condition in accident at Zebilla