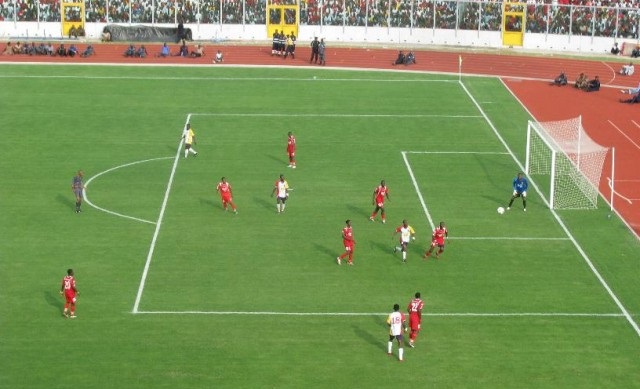 Many of Ghana’s premier league teams have been caught in various match-fixing deals.

This is captured as part of the grand undercover corruption exposé by investigative journalist Anas Aremeyaw Anas.

[contextly_sidebar id=”05gvZJJxpAdW33NNi43mEz52Id8ylhbS”]The yet-to-be-released video shows the teams conniving to pre-determine the outcome of games they are involved in for their various interests.

Although citinewsroom.com’s source did not name the clubs, the source said some top referees were also involved in some of the deals.  The source also indicated that the match-fixing deals were for Premier League and some FA Cup games.

Ghanaians are anticipating the screening of the investigative piece, dubbed “Number12” at the Accra International Conference Center (AICC) on June 6, 2018.

Already, the President of the Ghana Football Association is said to have been caught in the video using the name of the President of Ghana Nana Akufo-Addo and the Vice President, Dr. Mahamudu Bawumia and other senior government officers for deals.

He is reported to have taken money under the pretext of helping then set up in Ghana.

President Akufo-Addo made a formal complaint to the Criminal Investigations Department (CID) of the Ghana Police Service last week after watching excerpts of the undercover film.

Kwesi Nyantakyi has since been granted bail after he was questioned by the CID over the matter and had his phones and laptop seized.

The Deputy Minister for Roads, Anthony Karbo, has also been questioned by the CID.

Nyantakyi mentioned Karbo in the documentary as a critical ally in the government.

There are several allegations of match-fixing in Ghana football, but not much evidence has been produced to back the claim.

In 2007, division one clubs Nania FC, Mighty Jets, Great Mariners and Okwawu United, were each fined GH¢ 5,000 after they were found guilty of match-fixing.

Nania FC had beaten Okwahu United 31-0 in a game while Great Mariners wallowed Mighty Jets 28-0 in what many sports enthusiasts thought was unprecedented.

Following renewed allegations of match-fixing in some of the country’s recent local games, the Communications Director of the Ghana FA, Ibrahim Sannie Daara, said the FA was expecting a contingent of FIFA experts in Accra in January 2018 during its congress to help the FA handle issues of bribery and match-fixing.

“We have invited FIFA to deal with this situation of corruption, bribery, match-fixing and manipulation. So FIFA is sending some experts in this area to educate us. Those who will be educated will be members of the ethics committee, media men, match officials and all stakeholders who are susceptible to be influenced,” he said in a media interview.