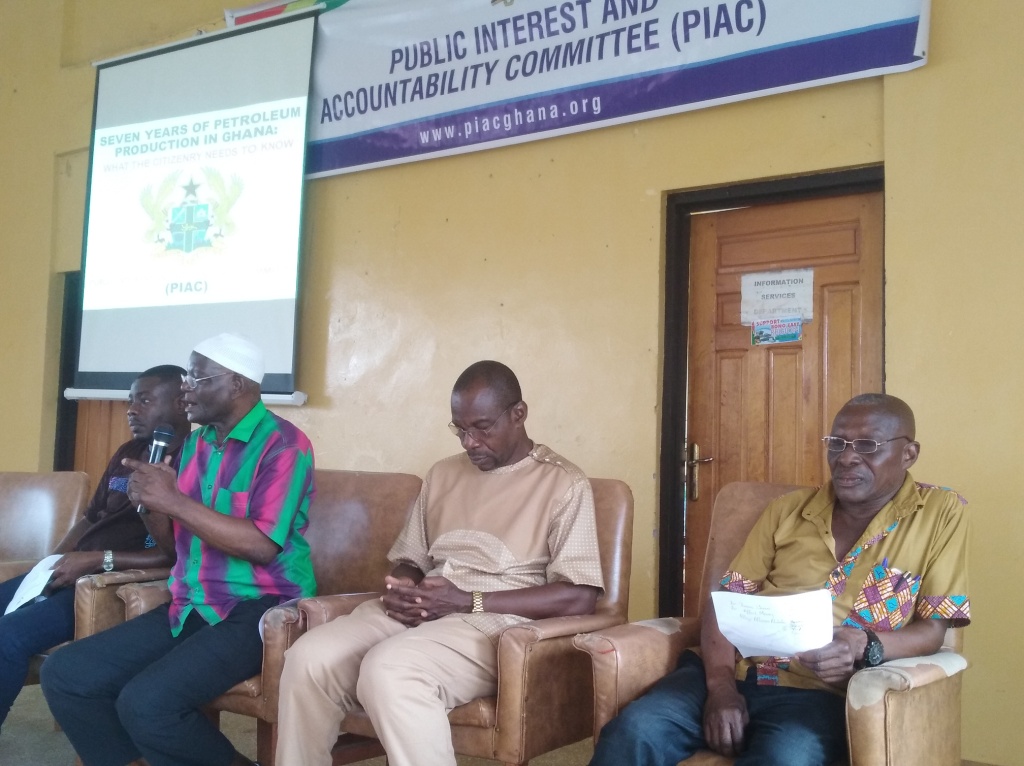 Participants and stakeholders at a forum in the Brong Ahafo Region have identified inadequate information and low involvement of community members in projects as the major challenge impeding the successful implementation of projects in the country.

[contextly_sidebar id=”rbsccCw6NmGD6IsfSB63h54p2lCYVv5H”]They also kicked against the use of the Heritage Fund to fund various projects and programmes in the country, arguing the fund must be left intact and invested as a strategic reserve to support future generations in the country when the petroleum reserves deplete.

The forum was organised by the Public Interest and Accountability Committee (PIAC) in collaboration with the Institute of Financial and Economic Journalist (IFEJ) on the management of petroleum revenues and mobilization from 2011- 2017 in Techiman and Busunya in the Techiman municipality and the Nkoranza North District in the Brong Ahafo Region.

The participants of the forum called on government and authorities to initiate measures to ensure full implementation of the decentralization concept as a way of bringing good governance to the grassroots.

The forum provided a common platform for local government authorities; CSOs and the public to dialogue on ways to better position themselves adequately in project and programme initiation and implementation to guarantee its success and ownership.

Speaking at the forum, the Vice President of PIAC, Dr. Thomas Kojo Stephens revealed that petroleum revenue accrued to the country was being used to tackle so many national projects at the same time. This, according to him, weakens the potential impact of the oil revenue on the socio-economic development of the country.

“Agriculture is the backbone of the country’s economy, regrettably only 11% of petroleum revenue has been allocated to the sector which is the main of the economy”, he opined.

He, therefore, called on government and stakeholders to properly define the guidelines in the selection of priority projects as well as identify certain legacy projects that can be fully supported by Annual Budget Funding Amount (ABFA).

He disclosed total receipts from the country’s oil discovery since the beginning of commercial production stood at US$ 4.009 billion as at 2017 and wondered why government was spending the money outside the core areas contained in the Petroleum Revenue Management Amendment Act, Act 815, as amended (Act 893) which mandates PIAC to monitor how petroleum revenues are utilized.

PIAC per the Act is to monitor and evaluate compliance by Government and Ministries, Departments and Agencies (MDAs) in the management and use of petroleum revenues and investments, provide platforms for dialogue on the proper utilization and conformity to development priorities and provide independent assessment on the management and use of petroleum revenue to assist Parliament and the Executive.

A member of PIAC and President of the Ghana Journalist Association (GJA), Dr. Affail Monney, commended residents for their active participation and demanding accountability from duty bearers.

He said PIAC was an independent and non political committee, mandated by PRMA, Act 815 to account to Ghanaians and Parliament and therefore tasked government to involve residents in project initiation and implementation to inject a sense of ownership to monitor the to succeed.

PIAC and IFEJ are on a two week inspection and monitoring tour of selected communities and projects funded from petroleum revenue from 2011-2017. The team have so far inspected the Upgrading of Hansua roads and links in Techiman, Upgrade of Asekye-Busunya-Dromakese road, Construction of a 6-unit classroom block at Anglican Primary School in Nkoranza and assessment of the implementation of the Free SHS programme at Techiman SHS and Nkoranza Secondary/ Technical School.