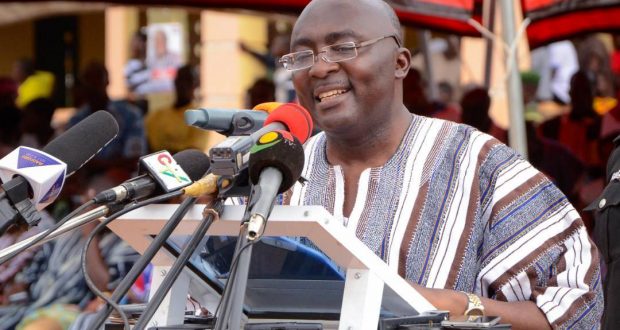 The government has delivered on its promises made to Ghanaians in the run-up to the 2016 elections, Vice President Alhaji Dr Mahamudu Bawumia has said.

According to Dr Bawumia, the NPP administration has fulfilled most of its promises including the free SHS policy, after 16 months in office.

He added that government is working assiduously to ensure it fulfils all promises before 2020.

[contextly_sidebar id=”zH87q4eUJBoITa8Q0DBKVslbViOWKwQM”]“We made many promises to Ghanaians, and we are working day and night to fulfil them. Some of them we have already been fulfilled. For instance, we promised Free Senior High School Education and true to our word, we have started. Today, finance is no longer a barrier to access to education for Junior High School graduates. That is a great burden lifted off the shoulders of parents by Nana Akufo-Addo’s government.”

The Vice President, who enumerated some fulfilled promises at various events in the Volta Region said the government is on course to meet its part of the social contract.

“We promised to pay closer attention to the developmental needs of the Zongos, and for the first time in the history of Ghana, President Nana Akufo-Addo has not only appointed a Minister for Inner City and Zongo Development Affairs but has set up a Zongo Development Fund and set aside budgetary allocation of Ghs100 million for it. Just last week we appointed a CEO and his two Deputies to run the Zongo Development Fund. This is evidence that when we make a promise, we keep it,” Dr Bawumia emphasized.

“To tackle graduate unemployment, we have set up the Nation Builders Corps (NABCO), and this year, we will engage 100,000 of our youth and help equip them with useful skills and experience,” Dr Bawumia added.

Government is also keen to see improvements in infrastructure, and the ongoing efforts would soon yield apparent benefits, the Vice President pledged.

Vice President Bawumia was in the Volta Region on the first leg of a nationwide Ramadan tour to pray with his Muslim brethren and seek Allah’s blessing for the nation.

He will also offer special prayers for the sustenance of the peace Ghana continues to enjoy in spite of the different religious faiths in the country.

The Vice President will visit the Eastern Region in the second leg of the Ramadan tour on Sunday 20th May 2018.

EPA warns of ‘poisonous’ fruits, vegetables on the market