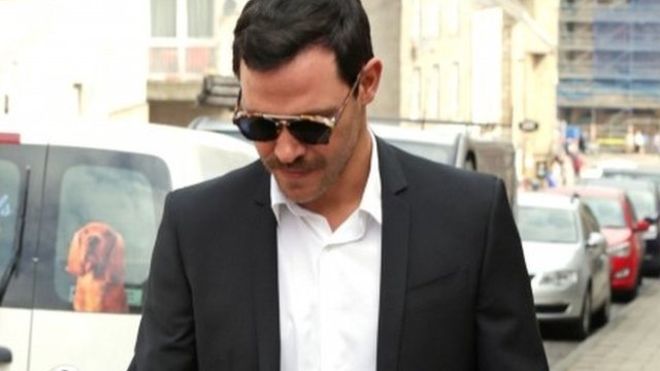 Singer Will Young has been banned from driving after a man had to jump clear of his car which then crashed into a parked vehicle.

The 39-year-old was driving on the A68 through the Borders when the incident happened near Earlston on January 21.

Jedburgh Sheriff Court was told that the singer mistook a bollard for the central reservation.

He drove into a lay-by, which had a parked car in it, at about 40 miles per hour before realising his mistake.

Conditions were described as “fairly poor”, with it being dark with snow.

Procurator fiscal Graham Fraser told how the owner of the parked Nissan Qashqai was returning from a friend’s farm and crossing the lay-by at the time.

He then had to “jump clear to avoid being struck”.

The court heard the entertainer braked to avoid hitting the man and lost control of his Mercedes G-Class.

‘Momentary lapse’
Young’s 4×4 was damaged but he “wrote off” the Nissan in the crash, the court heard.

His lawyer said “clearly he made a mistake” in relation to mistaking the bollards – which marked the entry to the lay-by – as the central reservation.

The court heard the singer had been “extremely apologetic” for his “momentary loss of control” and sheltered the man from the cold in his car before calling the police.

Young pleaded guilty in March at Selkirk Sheriff Court to driving without due care as well as at excessive speed for the weather conditions and for entering a lay-by, before appearing at the Jedburgh court for sentencing on Monday.

Sheriff J Euan Edment imposed five penalty points for the incident and banned him from driving for six months.

Young already had 11 points on his licence as well as a drink-driving conviction from 1998.

A disqualification comes if 12 or more penalty points are built up within three years.

Sheriff Edment said: “I understand it’s been a momentary lapse in concentration.

“To your credit you pled guilty from the outset. You took the man into your car – dealt with in in a very honourable and responsible manner.”