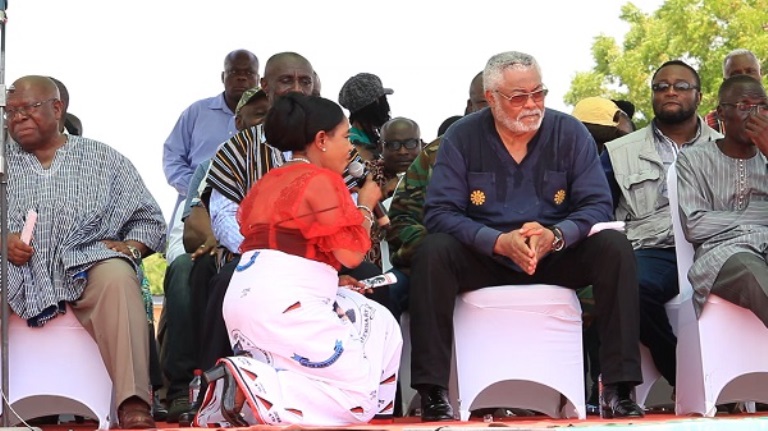 The National Vice Chairperson of the opposition National Democratic Congress, Anita Desosoo has appealed to the party’s founder; Jerry John Rawlings to pardon the executives of the party who have wronged him.

She knelt before Rawlings on Monday in Accra when the party marked the 39th anniversary of the June 4 uprising.

According to her, the founder is the father of the party and must be acknowledged as such.

Jerry Rawlings who was the country’s first democratically-elected president of the Fourth Republic refused to campaign for the NDC during the 2016 general elections.

Rawlings took the decision because he felt the current crop of NDC leaders had strayed from the party’s ideals which included transparency, probity and accountability.

But Anita Desosoo urged Rawlings to let bygones be bygones.

“…Now to my father, I know [as] your children we have erred, and I also know that you are a human being. You have also done something that may not be right. And I was so happy when you brought out a statement rendering an apology. You are a hero. This shows that what you have thought me is still within me,” she added.

Anita Desoso ‘is in order’ – Anyidoho

But speaking on Eyewitness News on Monday, Deputy General Secretary of the NDC, Koku Anyidoho said Anita did no wrong by offering an apology to the party’s founder.

“It was a party event for which the national chairman and leader of the party, Kofi Portuphy was supposed to speak and in his absence, Anita spoke. She said in trying to forge forward and building consensus and having a meeting of minds if it is a case that we have offended you, we apologize. What is wrong with that?”

Flt Lt Rawlings led a group of junior officers and men of the Ghana Armed Forces in an uprising against the then Supreme Military Council (SMC II) regime led by General F.K. Akuffo.

The move was said to have been motivated by a desire to stem the scourge of corruption that had engulfed the country at all levels leading to a virtual breakdown of the economy.