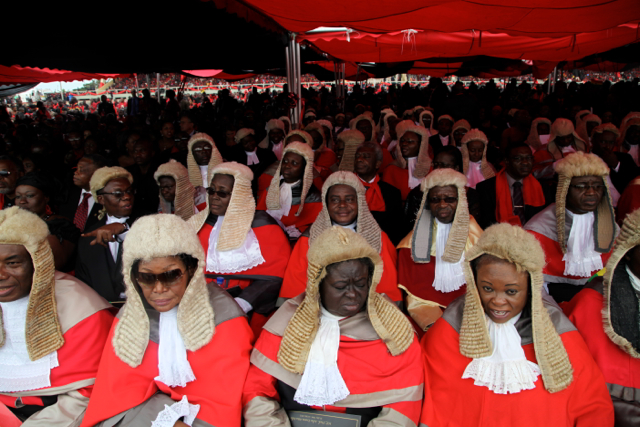 The Association of Magistrates and Judges of Ghana has served yet another notice, that it may strike over issues relating to their salaries and conditions of service.

At a press conference today [Friday], the Association suggested an appeal to President Nana Akufo-Addo will be their final act of mediation.

[contextly_sidebar id=”lDWbhRU0ghUwM0TCH1C8MIuziKkCHgWw”]Addressing the press, the association’s president, Justice Victor Ofoe, said the fact that the president is a lawyer may act in their favour because “he knows what judges go through.”

“So we expect that solution to come from the president as quickly as possible.”

The Association is however concerned with the fact that a purported meeting with the President and the Chief Justice, Sophia Akuffo, has not resolved the matter.

“Our worry is that nothing appears to have come out materially that will convince the judges that the government is taking the matter seriously,” he said.

CJ not a union rep

The Association is also upset that the Chief Justice is being made to look like a trades union representative.

“Why should be the Chief Justice be made a trades union officer to be seeing the president on the salary of judges? It is something very difficult for us to understand,” Justice Ofoe said.

“We find it very offensive if not provocative that our leader should be doing such trades union jobs which should not be the case at all because there are structures for reviewing salaries of judges.”

With the turn of events, Justice Ofoe said he was considering summoning the Association’s regional executives on July 6.

He served notice that the judges will not sit idle if their fortunes do not change.

“What is so special with our stomachs that if we are being cheated we should say no strike and be going hungry if Tanzanians and Zambians can go on strike and they will get their results.”

Members of the lower bench, including circuit court judges and magistrates of the district courts, threatened to withdraw their services in March over these concerns.

But the judges and magistrates suspended their intended strike following the intervention the Chief Justice.

It was reported at the time that she had begun talks with President Akufo-Addo, to resolve the concerns of members of the lower bench.