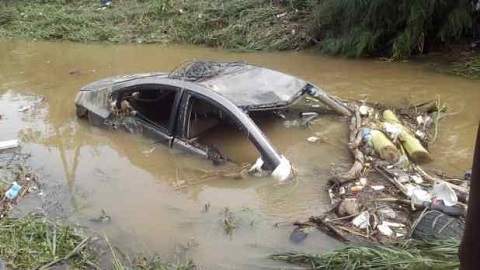 Some fishermen close to the Kpeshie Lagoon in Accra, have found the body of Dr. Ayah Hayfron who went missing after Monday night’s rains that flooded several areas.

[contextly_sidebar id=”W9ItgmipvvfIT9Ia8ioel48W9aWrDzFU”]Dr. Hayfron died after the strong currents of rushing flood waters carried the salon car she was driving into a drain at a suburb called Rasta, along the Teshie Bush Road in Accra.

According to an eyewitness, Dr. Hayfron had picked up two other passengers she wanted to help cross the rushing water to the other side of the road.

The two passengers were however rescued.

Israel Olokor, a resident who tried to save Dr. Hayfron and the two other passengers, in a Citi News interview said he had signaled Dr. Hayfron not to drive through the rushing water.

“On Monday at about 10:00pm, the rain started falling and I got up to move my car from that side because I stay around. But while I was moving, I discovered that the lady was on the other side and I gave her a little signal to hold on because the capacity with which the water was coming was too much. After I came back from parking my car, I discovered that she made an attempt to go into the water and her car was already locked in the middle of the bridge. We made every attempt to rescue them but it was just unfortunate we rescued only two people.”

He added that, “She picked two people in her car to help them cross to the other side. It was so unfortunate that for her, we could not rescue her. The time we wanted to reach out to her, that was when the water took her in the car into the gutter. We made every possible effort to save her but we couldn’t.”

The fishermen, after pouring libation early on Wednesday morning found the body.

The family has since confirmed the discovery of Dr. Ayah Hayfron’s body.

Dr. Hayfron, according to her husband, Bernard Kofi Agyei Oppong, has a 15-month-old child.

With the onset of rainy season, many homes and offices have lost properties as a result of flood waters rushing into their buildings.

So far, 7 people are believed to have died as a result of the downpour on Monday, with scores displaced, especially in flood-prone areas.

Many have partly blamed the situation on the siting of structures on waterways, and blocking of drainage systems that force rushing flood waters onto streets and into homes.