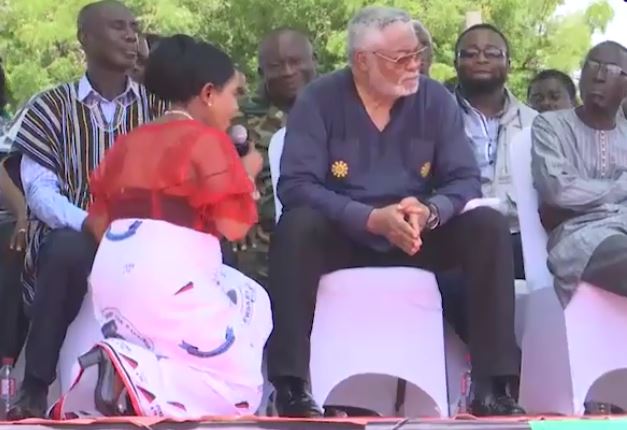 The General Secretary of the opposition National Democratic Congress (NDC), Johnson Asiedu Nketiah, has distanced the party from an open apology rendered to former President Rawlings by its National Vice Chairperson, Anita Desoso.

Madam Desoso in a much-publicized apology during a June 4th commemorative event at Madina in Accra, went on her knees before Mr. Rawlings to ask for forgiveness for certain comments made about him by party members.

She pleaded: “Now to my father – founder (Rawlings), I know your children we’ve erred, and I also know that you’re a human being and you have also done something; maybe it is not right and I was so happy when I heard you say that, when you brought that statement out rendering an apology – you are a hero. You are a hero.”

Mr. Rawlings in response to the apology made mockery of Anita Desoso accusing her of bleaching, and urging her to stop applying bleaching soaps.

However, according to Mr. Asiedu Nketiah, Madam Desoso acted unilaterally and without the prior consent of the NDC executives when she delivered that apology.

“I am talking to you as Chief Executive of the party and the person who keeps the records of decisions of the party. I am telling you that we never at any point, discussed the possibility or anything about approaching founder (Mr. Rawlings) and apologizing for anything,” the scribe of the main opposition political party said in an interview.

Mr. Nketiah added: “As we speak now, nobody knows the offence for which Anita was apologizing, and she did it and after she said it, we brought her to a meeting trying to find out what offence she was referring to, she couldn’t answer. So we considered it to be her personal issue with the founder”.