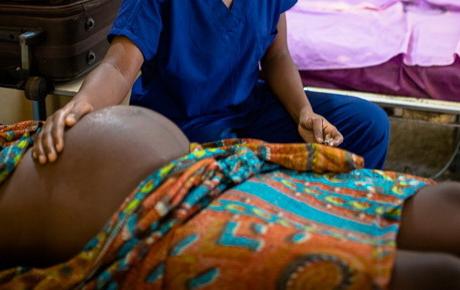 File photo: A lot of Ghanaian women and their babies die through child birth.

The Ashanti Regional Health Directorate has set up a committee to investigate how a 30-year-old pregnant mother and her unborn child died at the Suntreso Government Hospital.

The seven-member committee, chaired by Deputy Director in charge of Public Health at the Directorate, Dr. Yeboah Ewudzi, is expected to investigate the cause of the death and other concerns the bereaved family is raising.

[contextly_sidebar id=”VyW9vtIFElzuf14DldX98ZaVYRkXGPs0″]The committee is due to present its findings to the Regional Health Director in two weeks.

This comes after a young pastor of the House Faith Ministry in Kumasi, Pastor Solomon Lamour Latifm who lost his wife and unborn baby at the hospital threatened to sue the hospital for possible negligence.

He is blaming the death of his wife, Angela Afryie Agyemang and baby on negligence on the part of health workers who were on duty when she went into labour.

Speaking to Citi News after meeting management of the hospital, Ashanti Regional Director of the Ghana Health Service, Dr. Emmanuel Tenkorang, called on the bereaved family to be patient as his office awaits a report from the committee.

Pastor Solomon Lamour Latif of the House Faith Ministry in Kumasi, who was expecting his first child after one and half years of marriage narrated how health workers on duty left his pregnant wife who was in deep pain to her fate to die.

“We realized the pain was getting worse. I went to them again and said, madam, I do not know what kind of cleaning you are doing…look at the pain that my wife is going through, but one woman told me that the one they finished treating before my wife was even more severe than my case so I should stop what I am doing. I should even leave the place. I went straight to the doctor and said; doctor, you told me this case is an emergency…Long after that, he entered the theater, and immediately he entered the theater, they took my wife inside and long after she was taken inside, they came and called me, and I was marched into the theater only to realize that my wife is gone.”

He alleged that before his wife’s death the doctor on duty whose name was only given as Dr. Sarpong demanded a GHC 500 motivation fee for the cesarean session.

“He asked for motivation fee. I asked how much they take and he told me they take GHC 500. Initially, I was bargaining with him, but I realized there was no sense in bargaining with him. I only want the life of my wife and that of the baby, so he should go ahead and do it when he is done everything will be given to him, and the truth of the matter is he did not ask for the money before doing the CS. He told me that he would take the money when he is done. I have come to understand that someone was taken in instead of my wife, meaning there was some overtaking somewhere.”

Pastor Lamour Latif, who says he is disappointed in the country’s health system told Citi News he would take on the hospital over the death of his wife and baby.

“For now, I must tell the truth that I am not myself to be doing these things, but after we are done with everything, I will make sure I take legal action against them.”

The Management of the hospital told Citi News the matter had been referred to the Ashanti Regional Health Directorate.