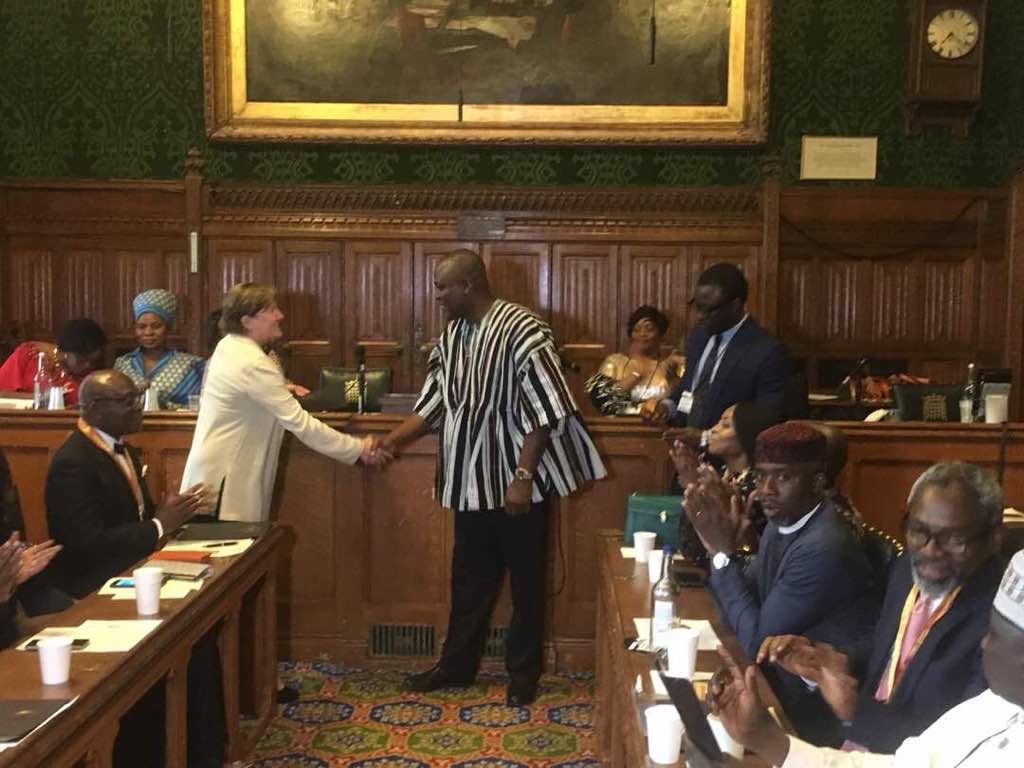 Ghanaian businessman Ibrahim Mahama, has been awarded at the 2018 African Achievers Award as the Industrialist of the year.

[contextly_sidebar id=”4gHaRiclHBfeJTEI76SZeDzWaLkpsDZv”]The Awards ceremony has fast become established as one of the biggest gatherings of influential and global African Achievers on the continent.

At the 8th Edition of the Awards ceremony held at the house of Parliament, London, Mr. Ibrahim Mahama was presented with the Award by Lindsey Oliver, a Co-Founder of the Aljazeera news channel.

Among the distinguished guests at the ceremony was the Rt. Hon. Diane Abbott, MP for Hackney North and Stoke Newington – London.

Mahama conveyed his appreciation to the organizers of the event, for the great honour done him and his company- Engineers and Planners, with the presentation of the award.

“I dedicate the award to the memory of my father E.A. Mahama, and my mother Joyce Tamakloe, both of whom were entrepreneurs,” he said.

He also dedicated the award to the hardworking management and staff of Engineers and Planners, whose untiring efforts have elevated the company to this stage. 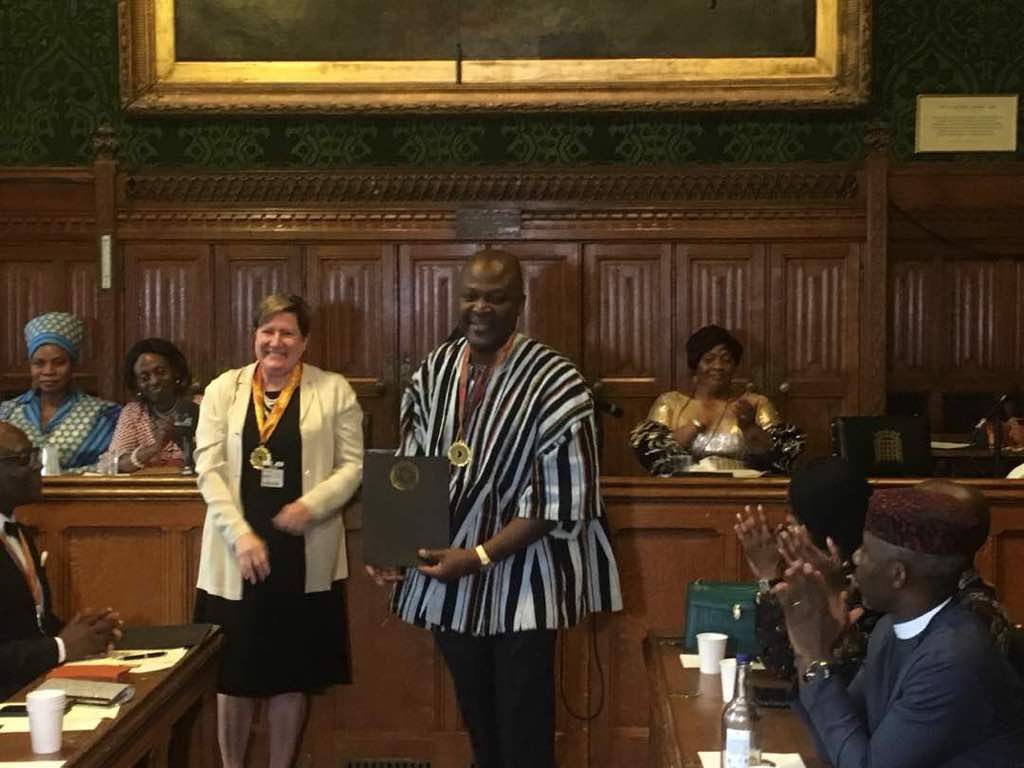 In 1997, with the equivalent of Five Hundred Pounds (£500) in his pocket, 26-year-old Ibrahim Mahama returned to his native country Ghana, after his sojourns in the United Kingdom, to set up a Heavy Duty equipment rental company- Engineers & Planners.

Soon, he noticed a business opportunity when the Ghanaian government at the time, decided to privatize all the state owned mining companies. Mr. Mahama reworked his business model to take advantage of the privatization drive of the government.

Today, that Five Hundred Pounds Sterling rental company is now worth more than Five Billion dollars in both Assets and Human Resource thanks to the leadership of Ibrahim Mahama.

In an interview with the organisers, Mr. Mahama intimated with dignity that he dropped out of school.

He explains, “not every one of us is cut for success in the classroom,” adding “this doesn’t mean that I am not in favor of schooling. School is very important and I will encourage every young man to aspire to the highest level of education”.

Engineers and Planners has built a huge portfolio in Ghana, working for mining giants such as Golden Star Resources and Goldfields Ghana. Today the company is an A-Class mining contraction firm competing in the midst of international Contract Mining companies.

The company employs close to three thousand workers working on both the Damang and Tarkwa mines owned by South African Goldfields. It continues to work on other satellite projects across the country including road construction, earthmoving and civil engineering works.

Ibrahim Mahama’s impact is not only limited to Ghana, his company E&P was the first to open up the Liberian economy to commercial mining activities after over two decades of civil war when they won the contract to mine the iron ore concession for Arcellor Mittal in Yekepa Liberia. 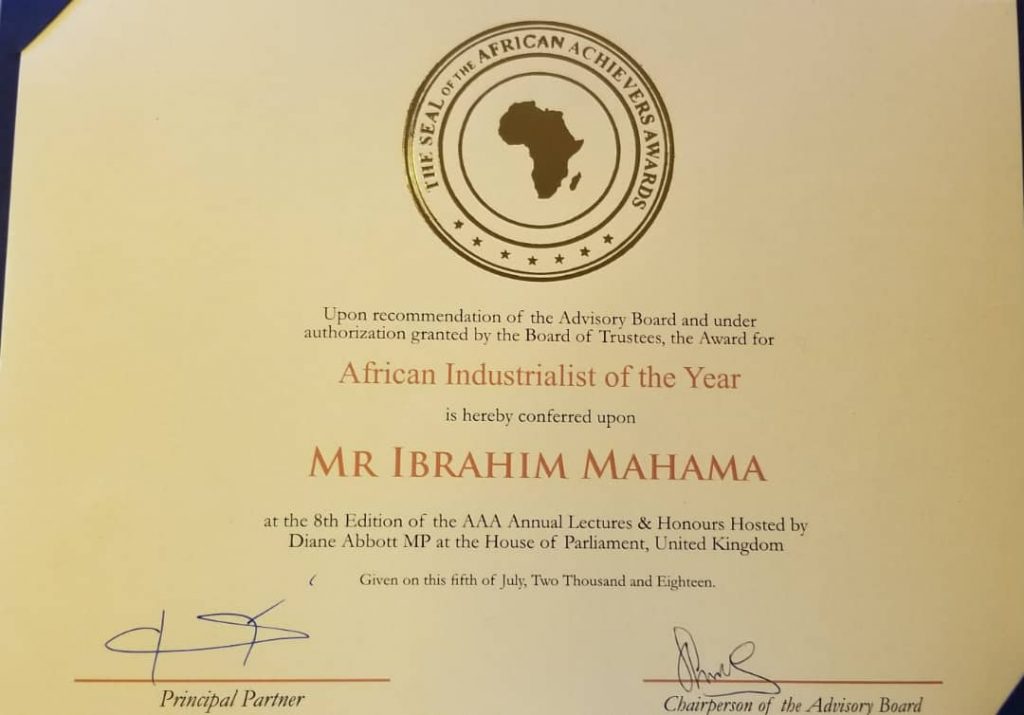 Mr. Mahama is involved in other business interests. He is the owner of Man Bosch Ghana Limited, (MBG) a company representing MAN DIESEL Trucks in Ghana.

He is also currently working on a cement producing company expected to provide employment opportunities for several thousands of Wholesalers and Retailers, across Ghana and the West African sub-region. The cement factory has a production capacity of 2.6 Million Tonnes per annum and this is the highest single cement facility in Ghana.

Speaking at the awards ceremony, Mr. Mahama emphasised his confidence in the African continent. “I believe that the opportunities exist for us as Africans to capture the commanding heights of our economies. As youth of the continent, we must think outside the box and seize the bountiful opportunities that abound right beneath our noses”.

The quintessential businessman expressed the belief that receiving his award, would spur other young Africans to aspire to establish their own businesses and take advantage of the opportunities Africa has to offer.