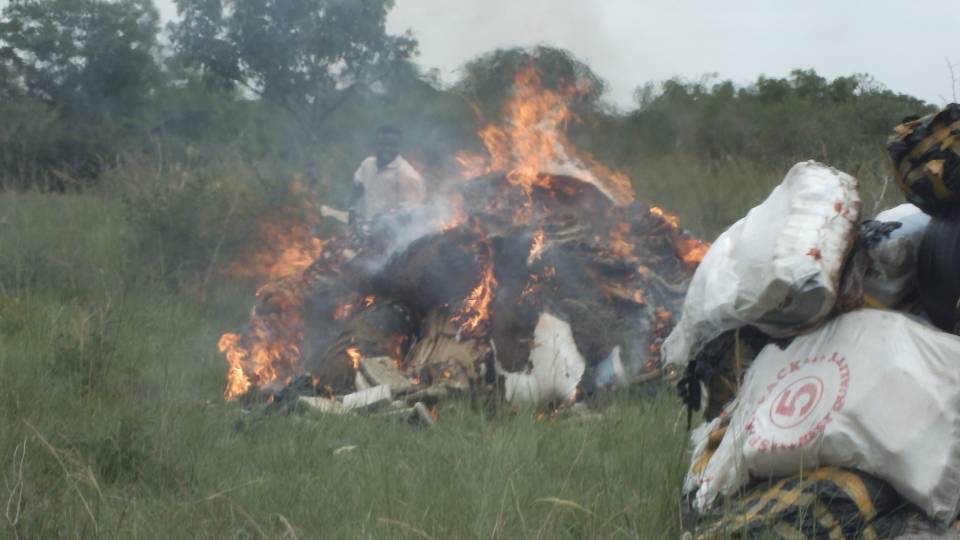 In a bid to clamp down on the use and trafficking of illicit drugs in the country, the Narcotics Control Board (NACOB) on Saturday destroyed narcotic substances estimated at 500, 000 Ghana cedis at the Bundase Military range in the Greater Accra region.

[contextly_sidebar id=”5c8q1A6MhIpMN9dZ7IJKXk7a9P9krY7S”]The exercise was carried out upon the orders of the Accra Criminal High Court 3 Judge, Justice Justin K. Dorgu.

The exercise also witnessed the burning of 100kg of Khat, a flowering plant native to the Horn of Africa and the Arabian Peninsula which is chewed and contains alkaloid cathinone and a stimulant, which is said to cause excitement, loss of appetite, and euphoria.

The 2016 World Drug Report by the United Nations Office on Drugs and Crime (UNODC) ranked Ghana number three in Africa, as a safe haven for the transit of illicit drugs to other parts of the world

The International Narcotics Control Strategy Report also noted that Marijuana is the main illicit drug used in Ghana and is trafficked within and from the country.

In December 2017, the Narcotics Control Board (NACOB) confiscated some 500 kilograms of marijuana at Asesewa in the Eastern region.

This was from a tip-off that a boat from Dzemeni in the Volta Region was loaded with cannabis and had offloaded its contents onto a truck at a village near Asesewa, with its final destination being Ashaiman in the Greater Accra Region.

NACOB, in collaboration with the District Police Command at Asesewa, intercepted the said truck with registration number ER 105-13 and arrested the driver, Stephen Narteh Sangmortey, whilst his accomplice fled upon sensing danger.

In all, 124 sacks, all containing dried leaves suspected to be cannabis sativa (wee), were retrieved from the truck.