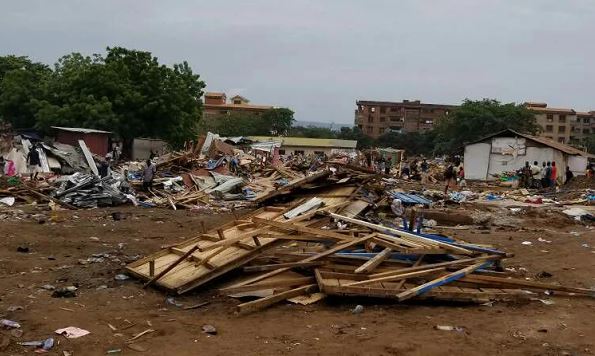 The Ningo-Prampram District Assembly on Friday demolished some shops and structures in the area as part of measures to curb perennial flooding in the area.

The shops and structures which were situated on waterways were demolished in the exercise which lasted for five hours.

Citi News’ Anass Seidu said some residents were particularly happy with the exercise.

[contextly_sidebar id=”OZbdm24ZHUmd6VMlKwPBFIs0mJ6lx0tF”]“When it rains, especially at night, we are all up because we don’t know if the rains would enter and flood our house. In fact, the community has no peace but today the community would get all the peace it needs and we thank God for that,” one resident stated.

“I feel so good, because we have been through a lot, it is only one man who is depriving the whole community. He has come to block the water, and when it rains the place is flooded and this destroys properties, so this is the right step,” another resident said.

The District Chief Executive, Johnathan Doku, said the assembly will pull down all buildings on waterways.

“I am using this medium to sound a warning to all other developers who do not have permits from the district assembly who build on waterways that they are the next target. I am telling you, we will comply with the law because if we are seen to be enforcing the law, we cannot be seen to be breaking it,” he said.

Last month, the Municipal Chief Executive of Adenta in the Greater Accra Region, Daniel Alexander Nii-Noi Adumuah, said the Assembly will take steps to ensure the demolition of buildings in waterways which is a major cause of flooding in the area.

According to him, some of the houses were built without permits and that the owners will be dealt with legally.

“We will seek legal help and remove those buildings because all these buildings do not have any permit because nobody will allow them to build in such areas. So why are people building without permits, we need to bring a bit of discipline into our system if the whole society is supposed to benefit,” he said.

The Accra Metropolitan Authority (AMA) also hinted it will demolish all structures in the capital that are on waterways.

This will be in addition to constructing and desilting major drains in a bid to deal with the annual struggles with flooding during the rainy season.