Pedestrian deaths in Accra; who is to blame? [Article] 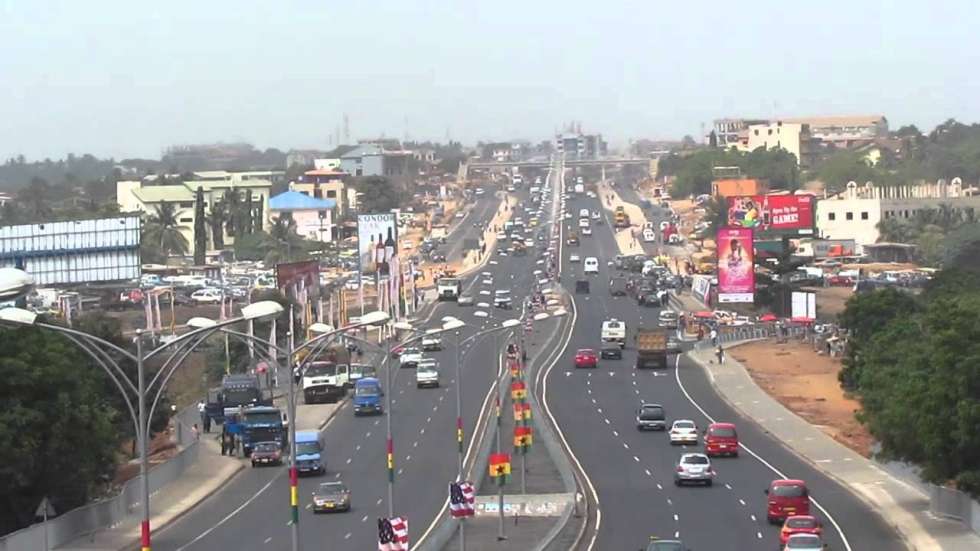 When I told a friend I would write to shine a light on pedestrians being knocked down by vehicles in Accra, he simply said, “Write about something else.’

Somehow I understood him; we keep talking, advocating and writing about our issues but nothing seems to influence the change we need to stay alive at least.

It has become so devastating that even journalists who have over the years devoted their lives to holding leaders accountable and have fought against societal ills have suddenly gone quieter.

We can’t give up!

How do you continue to talk about hopeless situations, greedy politicians, unfulfilled promises, and lawless individuals who show no remorse without getting exhausted eventually?  So, I thought, maybe I should redirect my strength into something else or join everyone to talk about current happenings in the country. Obviously, I didn’t do that because the same friend once told me “if we get tired of talking, who will do the talking?”

I have come to the conclusion that the lawlessness in Ghana and the lack of efficient law enforcers are what would eventually lead the country into a pit hole.

Few weeks ago, a 33-year-old pastor under training at the Trinity Theological Seminary, Benjamin Adu Boahene, met his untimely death when a car hit him against the wall of a house at Madina Estate. The driver, a Nigerian who was identified as Richmond was reportedly tipsy and alleged to be driving without a license.

A couple of days after this tragic event, citinewsroom.com reported the death of another road user who met his untimely death at the Kwame Nkrumah Circle Interchange opposite the Ernest Chemist Head office.

He was knocked down by a speeding Toyota Camry with registration number GE – 7224-17, splitting his body into halves.

As if that was not enough, we were again hit with the news that a Kia Truck loaded with cement blocks has run into street hawkers along the major Traffic Light intersection close to Ashiaman Market leaving at least one dead and six others including a young girl injured.

Once again lives were worth nothing; lives of Ghanaians were dreadfully taken, and for what?

In the midst of the blatant disregard for healthcare services and the fight by the Ghanaian media to end recent challenges confronting our health care system, pedestrian-vehicular accidents cases continue to increase rapidly.

According to statistics from the National Road Safety Commission, Accra remains the worst region in terms of regional fatality in Ghana. 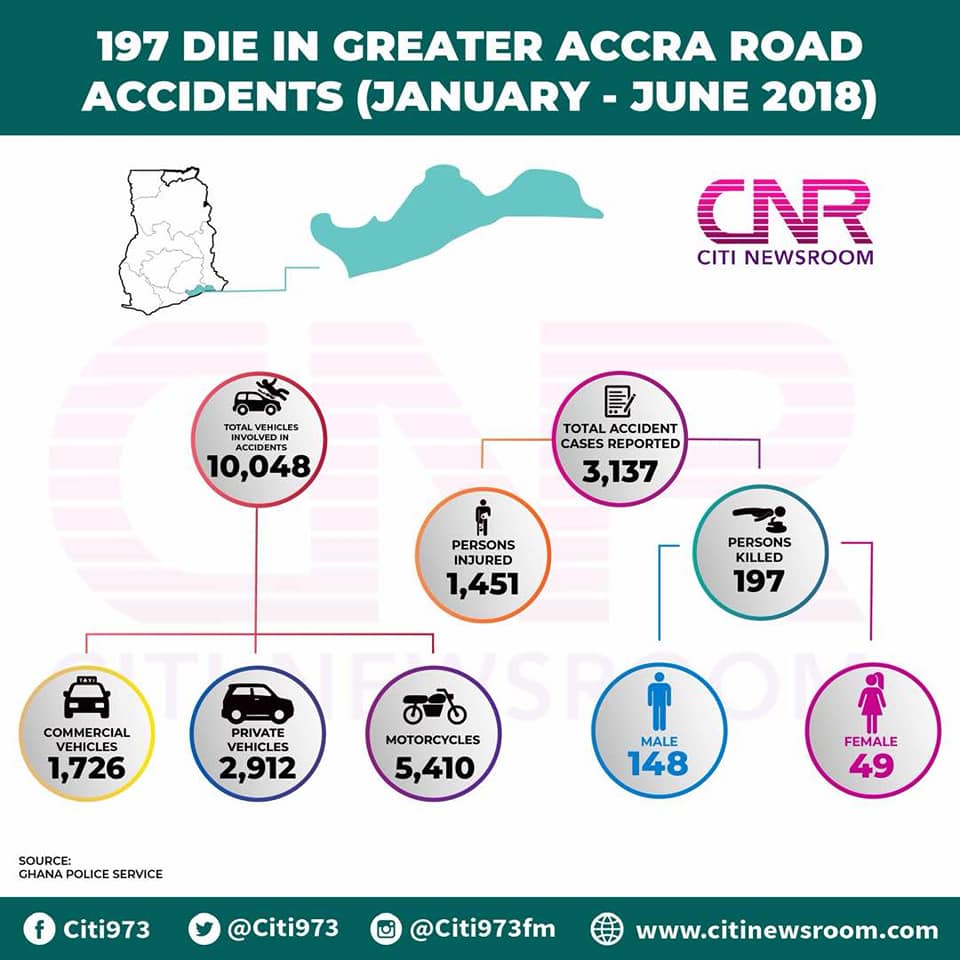 Statistics from the Ghana Police Service Motor Traffic and Transport Department showed that  1,113 pedestrians were knocked down by vehicles in 2016,  1,196 in 2017 and 332 in the 1st quarter of 2018  in the Greater Accra region alone.

Interestingly, the number keeps rising with an additional number of 345 recorded in June 2018.

A total of 1,170 persons were killed in pedestrian moto accidents in Accra from a compiled 2001, 2011, 2014 and 2017 statistics taken from the national safety commission and the Ghana Police Service.

Who is to be blamed?

In 1991, Ghana published a Japanese funded Geometric Design Guide that gave the standard for quality design in the Ghanaian context. In addition, a manual on road signs was designed to achieve an effective and efficient Geometric road design to improve road safety.

Again in 2001, the first National Road Safety Strategy (NRSSI) was developed, and then in the year 2011, the United Nations Decade of Action on road safety began. 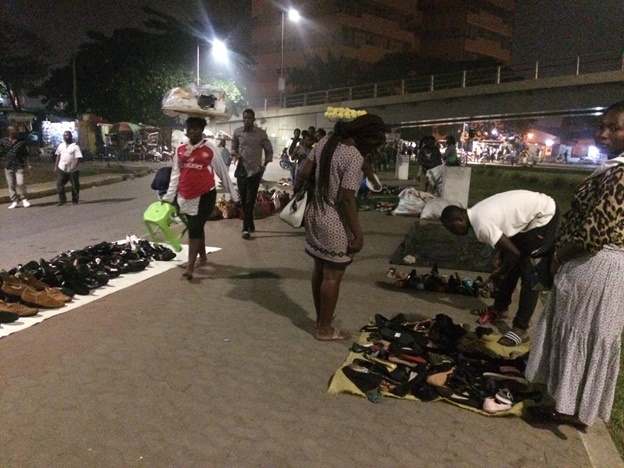 Unfortunately, several years after these developments, Ghanaians continue to drive on roads with their children in the back seat, but no assurance for their safety.

The most vulnerable are pedestrians who continue to have the highest risk of death in road traffic accidents.

The design of highways, roads and streets should utilize engineering expertise required to ensure optimal efficiency and safety while minimizing cost.

The reality in Ghana is that the many trained engineers who should be devoted to this cause travel to other countries in search of better jobs leaving behind the problem of outdated road design standards and the high cost of road infrastructure.

The manifestation of this situation is the poorly located and constructed roads and interchanges in Accra with a critical example being the George Walker Bush Highway which forms part of the N1 highway.

The road which is designated a motorway has been designed an urban arterial causing the death of many Ghanaians yearly.

The few walkways and foot-bridges the city can boast of have been unlawfully taken over by hawkers, traders and commercial motorcyclist or otherwise known as ‘Okada riders.’

Sideways at areas like Kantamanto market, Circle, as well as footbridges at Shiashie and East Legon among others, are being used by traders as market centres with impunity.

Huge trucks loaded with large quantities of goods are not expected to use motorways but we encounter them on our urban roads sharing space with commercial and private vehicles as well as these hawkers and traders who illegally sell on the shoulders of roads.

The implication is the damaged roads in the city and the disastrous incidents of trucks running into hawkers along these roads.

A student of the Ghana Institute of Journalism (GIJ) recently described to me how some roads at Madina have been unlawfully turned into a marketplace.

“The road opens slowly for vehicles to pass and quickly turns into a massively occupied marketplace as soon as the vehicles move away,” she narrated.

Trades and hawkers have transformed our roads into supermarkets at the expense of everyone’s life. 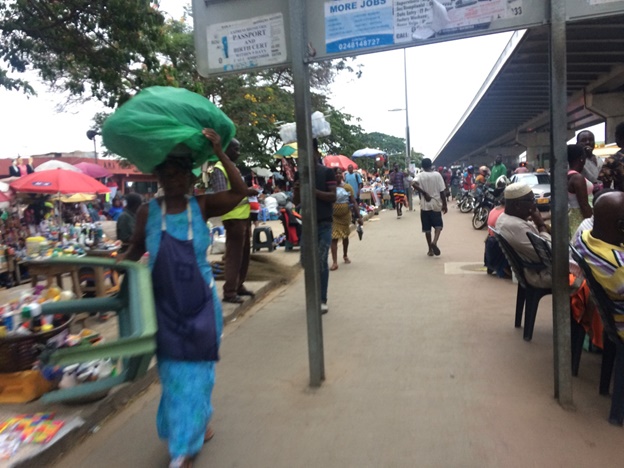 It’s a worrying sight as some Ghanaians seat on plastic chairs on walkways along roads for whatever reason it is while others are seen piling up rubbish and even sleeping along major roads at the Kwame Nkrumah Circle interchange.

The mindset of  Ghanaians if not changed will continue to increase the numbers in pedestrian knock-down cases reported yearly as these actions and inactions endanger lives on our streets. Let’s face it, we are killing ourselves!

Unfortunately, the issue seems to be getting out of hand as some pedestrian who avoids sharing walkways with these sellers are sometimes forced into endangering their lives by sharing traffic roads with motor vehicles.

Although for bus and motorcycle fatalities, safety measures and enforcements are expected to bring to the trends downward, it appears less attention is directed at reducing pedestrian knock-down cases.

There are still critical accident blackspots especially on our highways taking the lives of road users annually but very little is done to identify and treat them.

Commercial and private drivers, as well as motorcyclist, shut their eyes to speed restrictions, traffic codes, while many are seen jumping red lights and ignoring road symbol signs.

Maybe Kotoka International Airport or the Flagstaff house but, as far as I know, zebra-crossings in this city are respected by no person.  Pedestrian crossing signs seem to have no meaning to drivers, who have stickers on their windscreens with the inscription, ‘I will stop for pedestrians’.

The National Road Safety Commission, the Ghana Highway Authority, Ghana Police Service and the Accra Metropolitan Assembly clearly have a lot more to do as far as the implementation and enforcement of pedestrian safety measures are concerned.

How is the pedestrian contributing to the killings?

The other day, I watched a young man jump over a barricade in the middle of a major road at Circle. The driver who nearly knocked him down stretched his arm to knock him on his head but missed. Yes, that’s the problem with us; we have normalized illegal acts that even if we may be killed in the act we don’t seem to care. 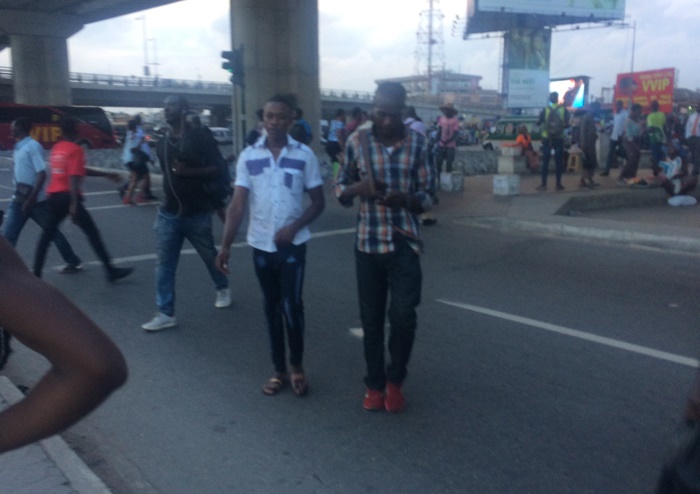 Statistics show that from the periods of 2013 to 2015, about 41% of pedestrian vehicular accidents were caused by the carelessness of some of the pedestrians.

There are times pedestrians are seen busily on their phones while crossing roads.

The bad behaviour of road users contributes to the overwhelming danger on our roads with a continuous case of pedestrians losing their lives to their own recklessness.

A taxi driver I encountered in Accra, Wilson, explained to me how road users leave pedestrian crossings to cross roads at dangerous places.

“Look at that woman, she’s carrying a baby at her back but trying to cross the road here. A zebra-crossing line is just a few minutes’ walk away from her but she won’t use it. If a car knocks her down, whose fault is it,’’ he burst out angrily.

Bad pedestrian behaviour such as non-compliance to traffic signals, using roads while drunk, wearing non-reflective clothes at nights and dawn, crossing barricaded parts of highways, walking outside crosswalks and using mobile phones and headphones while on the road among others contribute to pedestrian-vehicular accidents. 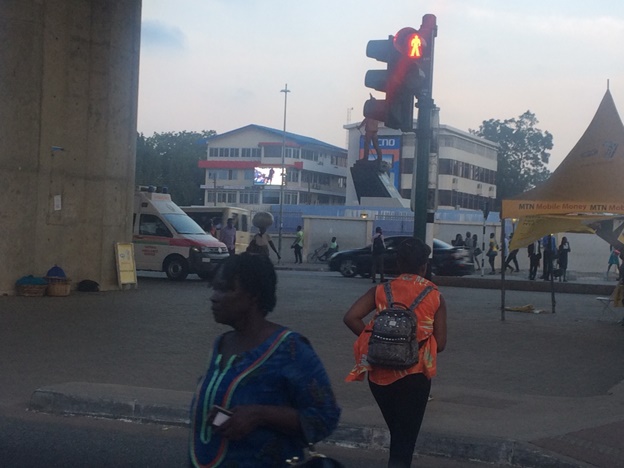 As law enforcement agencies direct attention to the driving public, they should also look out for bad pedestrian behaviour that contributes to the urban traffic problems in Accra.

Meanwhile, regardless of confronting road infrastructure challenges, it is important for Ghanaians to adopt and adhere to safety behaviours while using the road.

I would also like to say that there are a thousand and one drivers and pedestrians who use the road illegally while security personnel look on.

The deaths on our roads are caused by the lawlessness of road users and the less attention on the part of the appropriate government institutions and agencies including the Accra Metropolitan Assembly to rectify these issues.

The design of our roads and the lack of expertise in the field of highway engineering in this country cannot be left out of the challenges.

Pedestrian knock-down cases in Accra can only be objectively viewed from all angles if we look forward to bringing the trends down.  Our roads should be made safe for both driving publics and pedestrians!