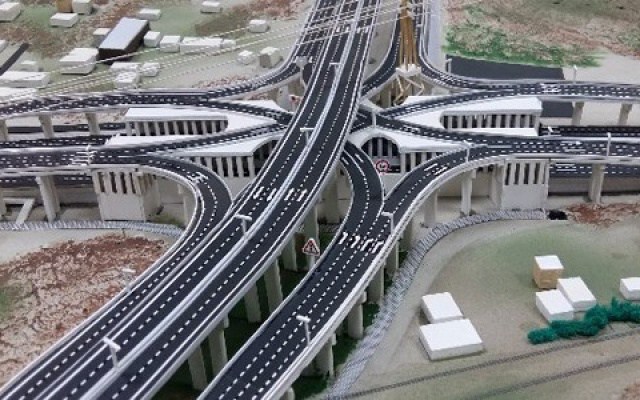 The Senior Minister, Yaw Osafo-Maafo, on Tuesday performed the ground-breaking ceremony for the construction of a three-tier Pokuase Interchange and other roads in the Ga West Municipality of the Greater Accra Region, to ease traffic congestion.

The project is jointly funded by the African Development Bank (AfDB), and the Government of Ghana at an estimated cost of US$84 million, and it is expected to be completed in April 2020.

It is being executed by the Zhongmei Engineering Group Limited under the Accra Urban Transport Project (AUTP), to facilitate the free movement of people and transportation of goods and services in the rapidly developing industrial zone of the Ga West Municipality.

[contextly_sidebar id=”dRnAm1VHZK6KW4UUybayYj0y5UDfwQPp”]It comprises the construction of a five-kilometre Awoshie-Pokuase road, a three-tier interchange at Pokuase ACP Junction, a two-kilometre Accra-Nsawam Highway, a two-kilometre Kwabenya road and a 10-kilometre local roads.

The project also include the development of an urban master plan, which would provide a common and holistic platform for integrated transport and urban development solutions in Accra.

The Senior Minister, who cut the sod on behalf of President Akufo-Addo at a well-attended ceremony at Pokuase, said on completion of the project, it would help ease traffic congestion in some selected local roads within the four quadrants of the interchange, and enhance the competitiveness of Accra as a major trade and industrial hub in West Africa.

He urged the contractors and supervisors to execute the project in accordance with project specifications and design, saying; “We shall not entertain any shoddy work on this project and will be following up very closely to make sure that the project is delivered according to design.” 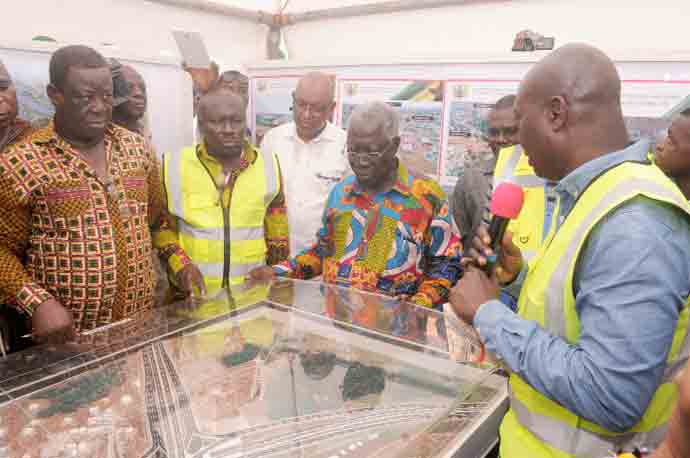 The Minister urged the Urban Roads Department and the Ministry of Roads and Highways to provide adequate supervision and ensure timely payment of compensation to affected individuals to prevent any delays.

The Senior Minister said on completion of the project, it would provide an integrated, viable and sustainable transport infrastructure to meet the goals of poverty reduction, regional integration and establish Ghana as a transport hub within the West African sub-region

He noted that it would help unlock the economic potentials of the industrial area, boost trade and provide income generating opportunities and affordable transport services and improve the livelihoods of the people of the area.

He said government was determined to improve road infrastructure across the country because traffic congestion hindered economic growth and wasted man hours and a major waste of human resource productivity.

“Sometimes we take traffic jams cost for granted, but the cost to the nation is big, if you imagine that about 10,000 people are held in traffic one hour more than necessary, you’re losing 10,000 man hours for productivity in the country,” Mr Osafo-Maafo observed.

The Minister said the project would provide a major face-lift in the area and improve transportation for the commuting public and reduce traffic time and vehicle cost as well as enhance road safety and standards.

“In addition to this project, it will also provide some facilities for the improvement of the lives of the people, particularly women and girl-child, and create job opportunities for our abled youth through training and the use of new technology,” he added.

Mr. Kwasi Amoako-Atta, the Minister of Roads and Highways, for his part, said the government had resolved to develop the country’s infrastructure to make her competitive and facilitate rapid growth of the economy towards attaining the “Ghana beyond aid” agenda.

He said the country inherited some roads in deplorable state and assured that it was determined to fix those roads in due course.

“We are going to monitor the construction company very closely with an eagled eye and I have competent engineers in my Ministry to do that and, therefore, advise the company that had won this contract to ensure that they deliver quality work to the good people of this country and anything otherwise will not be tolerated under any circumstance,” Mr Amoako-Atta cautioned.

In line with government’s policy to improve road infrastructure, he said, it had undertaken other projects in Accra.

He made reference to a new underpass at East Legon to link Spintex, an ongoing works of an interchange at the end of the Tema Motorway, an interchange at Obeshebi Lamptey Circle, a 9.1 kilometre spring road from Palace Mall in the Ledzokuku Municipality to Community 18 in the Tema West Municipality and an eight-kilometre Teshie Lascala road to Spintex road.

Mr Amoako-Atta noted that the Pokuase Interchange Project would not be isolated but would be connected to six-lane dual carriage road from Accra to Kumasi, which would be constructed before the end of the tenure of the Akufo-Addo-led government.

Dr. Yero Baldeh, the Country Manager of the AfDB, in an address, said the Bank had been playing a leading role in infrastructure development in Ghana, noting that, it had financed 10 road projects since 1981 amounting to US$613 million.

According to him, the projects financed by the Bank had made significant contributions towards improving mobility, providing access to socio-economic opportunities for millions of people and facilitated regional integration.

He said that the Fufulso-Sawla Project received a Bank Award in May 2017 for contributing towards regional integration.

The construction of the interchange was necessitated by the urban sprawling within the Ga West Municipality, Nsawam and overwhelming traffic congestion at Pokuase and adjoining roads leading to and from Kumasi and Eastern Region at peak hours.

By: citinewsroom.com with addtional files from GNA

Koforidua ‘painted’ with posters ahead of NPP Congress [Photos]

Akufo-Addo jets off to South Africa for state visit

Akufo-Addo jets off to South Africa for state visit