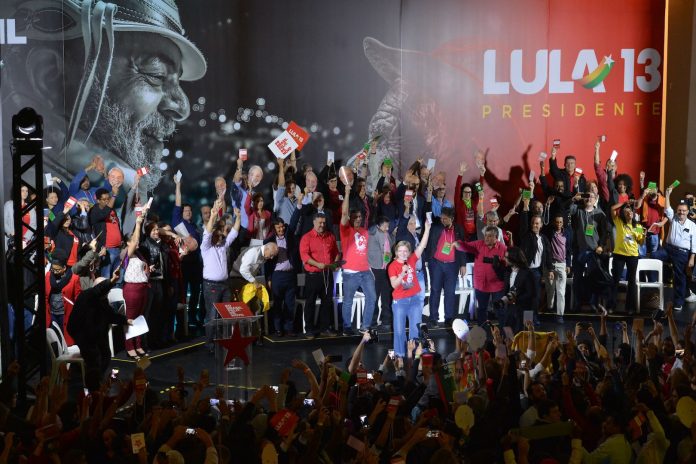 In the first survey after presidential hopefuls were officially registered as candidates, former president Luiz Inacio Lula da Silva continues as the solid frontrunner for the October Presidential Elections in Brazil.

The problem is that the former leader has been jailed since April for corruption and according to Brazilian law is ineligible to run.

The survey led by Ibope and released on Monday (August 20th) shows former President Lula with 37 percent of voter intention, followed far behind by right-wing candidate Jair Bolsonaro, with eighteen percent of the votes.

Bolsonaro is followed by former environment minister Marina Silva, with six percent and a tie between Ciro Gomes and Geraldo Alckmin with five percent each in voter intention.

Lula’s PT party (Workers’ Party) registered him as its candidate in Brazil’s Electoral Court on the last day of registration and has asked the country’s Supreme Court Justice to allow him to run. Many of Lula supporters say the former leader’s imprisonment is a conspiracy to prohibit him from running again.

“It is all a set up so he can’t run,” says retired teacher Thereza Musso in Rio de Janeiro. “They know if he runs he will win easily and that scares them (opposition), so they put him in jail on a bogus charge that can’t even be totally proven.”

In the poll where President Lula’s name is not a choice, Jair Bolsonaro appear with twenty percent of voter intention, followed by Marina Silva with twelve percent, Ciro Gomes with nine percent and Geraldo Alckmin with seven percent.

Although Haddad has the support of the former leader and was Education Minister under the second Lula Administration, the survey showed that the jailed ex-president will not easily transfer his votes to his protégé.