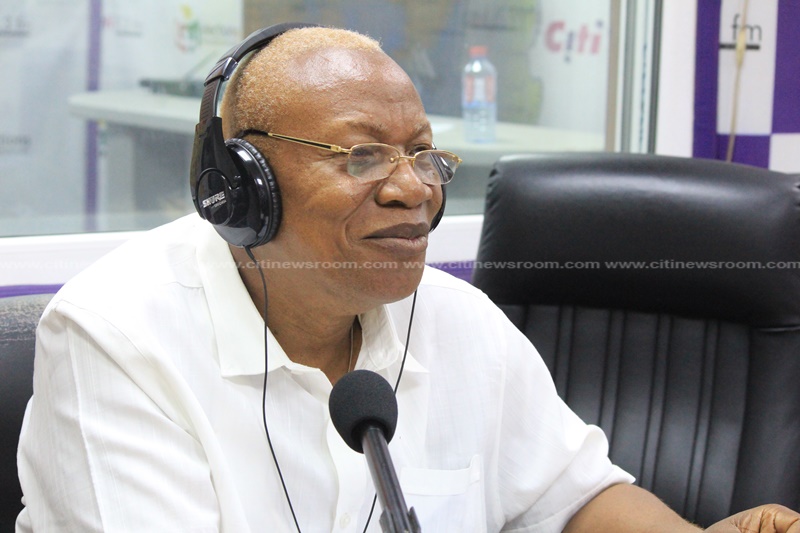 A former Vice-Chancellor of the University of Professional Studies, Accra (UPSA), Professor Joshua Alabi has officially informed the National Democratic Congress (NDC) of his decision to contest in the party’s presidential race ahead of the 2020 polls.

[contextly_sidebar id=”ngYpXiTVmxWnRkbbih75yqkkAVkOss9f”]Professor Joshua Alabi is the second flagbearer hopeful to formally inform the party of his decision after former NHIA Boss, Sylvester Mensah.

Presenting his letter at the party headquarters in Accra today [Monday], Professor Alabi promised to run a decorous campaign ahead of the party’s executive elections in December 2018.

A member of Alabi’s campaign team, Victor Kojogah Adawudu who spoke to the media said the team would not do anything untoward but focus on selling its campaign message to delegates.

“Everybody within the party knows who Prof. Joshua Alabi is and it is his word and our word that the campaign will be very civil, devoid of acrimony. This is a family together, and we promise that we will not get into insults and invectives because, at the end of the day, it is the same NDC family. It is a contestation of ideas, how to do things. And we will give honour to everybody who reciprocates the honour. Just to promote the party that we will not do anything untoward. We hope that everybody will play according to the rules of the game.”

Meanwhile, a former Deputy Speaker of Parliament, Ken Dzirasah has said the former Krowor Member of Parliament, Prof. Alabi is the best candidate to represent the National Democratic Congress (NDC) in the 2020 elections.

According to the party elder, his decision to support Joshua Alabi was informed by the potential difficulty the NDC would face in marketing the former President John Mahama who lost the 2016 elections as an incumbent president.

Former President, John Dramani Mahama is however tightlipped over his presidential ambitions with an excuse that he wants to focus on the party’s restructuring and healing process to make the NDC a stronger force in the elections 2020.

Ahead of the party’s presidential election, 94 NDC Members of Parliament out of 106 have reportedly endorsed John Dramani Mahama to lead the party in the 2020 elections.

“I can tell you that we have 94 MPs who have faithfully and critically endorsed our former President, John Mahama, to be the candidate once again. This excludes our leaders. The grassroots of this country, the majority of Ghanaians are crying for John Dramani Mahama and as such it will be wicked on our part not to listen to the plea and cries of Ghanaians by giving them who they prefer. So we are bringing back John Dramani Mahama and we are very sure in our minds that Ghanaians will this time accept him and overwhelmingly vote for him to become the next president in Ghana in 2021,” he added.

Produce the list of NDC MPs who endorsed Mahama
Meanwhile, an NDC flagbearer hopeful, Joshua Alabi, is livid over the endorsement.

A former NDC MP, who’s in the camp of Mr. Alabi, Nii Amasah Namoale, questioned the move and insisted that the purported list must be made public to ascertain its authenticity.

“They should publish the names of those MPs because I am hearing some MPs are denying that they have not signed anything yet their names are on the lists,” Mr. Namoale said on Eyewitness News on Tuesday.

Sylvester Mensah had expressed hope of becoming the next presidential candidate of the NDC.

He stated emphatically that by January 2019 after the NDC presidential primaries, he would have been elected as the new Flagbearer of the party.

“The mood in the party today is for change, change has occurred throughout the constituency elections, we expect to see a lot more changes in our regional elections and a lot more at the National elections and then we will be plunging into the Presidential primaries. I will be happy to meet with you sometime in January when I will be flagbearer of the NDC and have a chat with you about the visioned future of the country,” he told the host of Citi TV’s Face to Face Godfred Akoto last week.