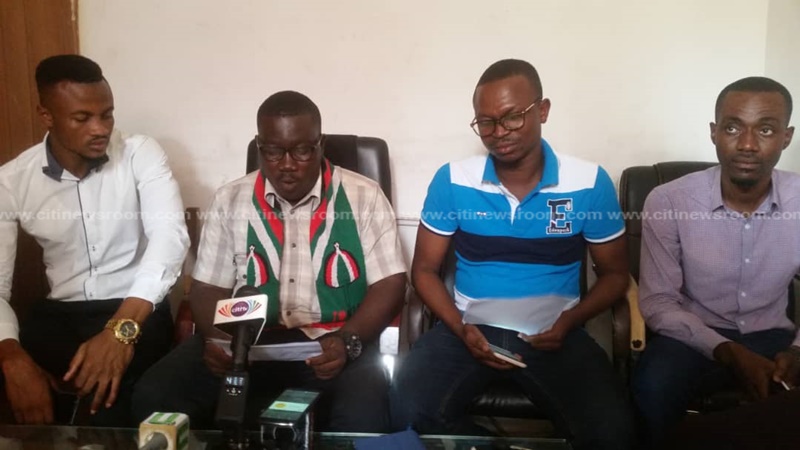 The Brong Ahafo Regional Youth wing of the opposition National Democratic Congress [NDC], is urging the Brong Ahafo Regional Police Command to bring to order some NPP thugs in the Asunafo South Constituency, who according to them, are seeking to frustrate the ongoing limited registration exercise, ahead of the referendum for the creation of new regions.

According to them, they will be forced to face them squarely if the police fails to bring them to book.

The limited registration exercises being conducted by the Electoral Commission (EC) as part of preparations for the referendum on December 27 towards the creation of new regions, is taking place in 17 districts which fall within the proposed Ahafo and Bono East Regions in the current Brong Ahafo Region.

According to the NDC Youth Wing, the NPP is using its thugs to chase away people they suspect to be members of the NDC from registering in the ongoing limited registration exercise in the Asunafo South Constituency.

Addressing journalists in Sunyani, the Deputy Youth Organizer of the NDC, Owusu Nkrumah Ababio, recounted cases of alleged attacks on some NDC members.

“The registration exercise started peacefully across the region until the NPP thugs in Asunafo South Constituency decided to prevent people they presume to be NDC from registering. The beauty of the process was marred with violence when the NDC Women’s Organizer Rita Donkor and the Communications Officer, Solomon Osei for Asunafo South were beaten by NPP thugs,” Mr. Ababio alleged.

Owusu Nkrumah Ababio urged the Brong Ahafo Regional Police Command to act swiftly to ensure there is peace in the area.

He however warned they would release their Dragon forces and Salifu Eleven, to meet the NPP thugs squarely if nothing is done about the situation.

“We will as a matter of urgency advice our boys to retaliate with all the strength within them, if the police continue to close their eyes on the happenings in the Asunafo South,” Mr. Ababio warned.

Heads of 6 state agencies under Mahama 'misappropriated' over Ghc800m - Report