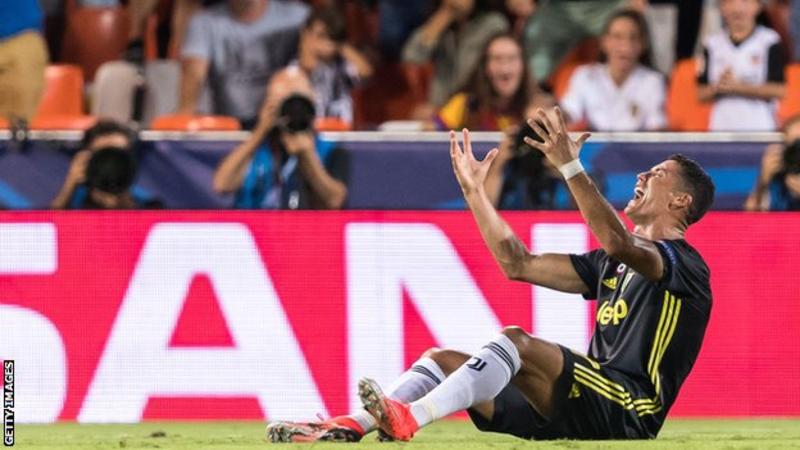 Juventus forward Cristiano Ronaldo will be available to play former club Manchester United next month after Uefa ruled he must serve only a one-match ban for his Champions League red card.

The Portugal captain, 33, was sent off during Juve’s 2-0 win over Valencialast week after appearing to pull defender Jeison Murillo’s hair.

It was the first Champions League red card of Ronaldo’s career.

A three-match suspension would have seen Ronaldo also miss the return fixture in Turin on 7 November.

He will definitely miss Juve’s next Champions League game against Swiss club Young Boys on 2 October.

Five-time Champions League winner Ronaldo – who joined Juve from Real Madrid for £99.2m in the summer – tried to latch onto a cross when he was blocked off by a tumbling Murillo.

He gesticulated to Murillo to get up and appeared to pull the defender’s hair before turning away in frustration.

Referee Felix Brych consulted his assistant behind the goal before producing a red card, reducing Ronaldo to tears as he left the pitch.

Unlike the Premier League’s automatic three-game ban for violent conduct, Uefa’s punishments are on a case-by-case basis.

A one-game ban is automatic – with no right of appeal – but Uefa regulation 50.01 for the competition says that “in case of serious offences, the Uefa control, ethics and disciplinary body is entitled to augment this.