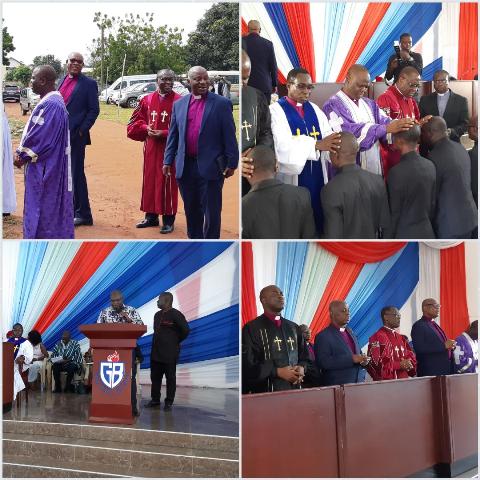 Reverend Dr. Ernest Adu-Gyamfi, Executive President of the Ghana Baptist Convention (GBC) has urged Ministers of the Convention not to measure their effectiveness by the numbers in their Churches.

He also advised them to rejoice in the success of their colleague pastors and keep themselves away from ministerial jealousies in the work of God.

Rev Adu-Gyamfi gave the advice to the 38 newly ordained ministers at the closing ceremony of the 55th Annual Session of the GBC at Ejura in the Ashanti Region over the weekend.

The four-day annual session, which was on the theme: “Kingdom Loyalty for Accelerated Development,” brought together members of the convention across the country, Africa and the world, and head pastors of other churches to solidarise with the Convention.

It climaxed with praises and thanksgiving for their lives and how far God had brought the Convention. Rev Adu-Gyamfi said the call to ministry was a great job and that there was a solemn responsibility in Christian Ministry.

The Executive President charged the ministers to make preaching of the gospel their priority and find time to renew and upgrade their knowledge by reading the Bible on daily basis.

He said the most sacred thing ministers should do was to be taking serious rest, adding that, the call to ministry was a lonely professional job and so they must draw their wives closer to them.

Rev. Adu-Gyamfi stressed the need for the ministers to read wide to acquire more knowledge that would be impacted in the coming generation.

“Don’t go and undermine the senior pastors in your churches, but you should respect them and be role models to the coming generations”.

Apostle Jude Hama, Former President of the Scripture Union in a sermon also advised ministers of the GBC to be sober-minded and fulfil their ministerial duties diligently devoid of misconceptions.

He said pastors and ministers in Christianity must preach the word of God and not opinions and philosophies, and that there were many charlatans in the in Christendom in these times.

Apostle Hama said pastors must be loyal, truthful and God-fearing to their congregations no matter what hard times they go through and that determination, commitment and hard work was the key to success in every situation.

He asked them to set the pace for the younger generation to emulate by being respectful, humble and peace-loving people in society as Christians must live the life of Jesus Christ and what he practised.